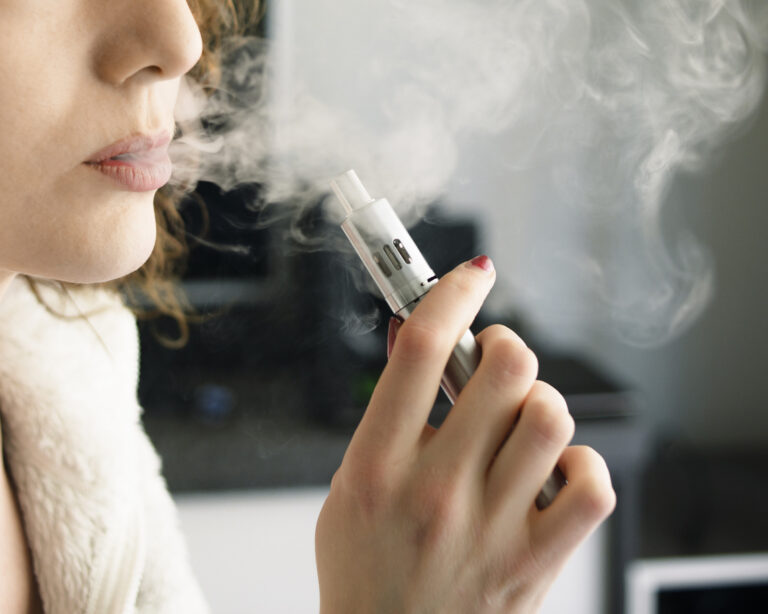 Close-up of a young woman exhaling smoke vapour from an electronic cigarette, holding the device in her hand. Shot at home, indoors.

Vaping is a popular, healthy alternative to smoking. Vapers inhale water vapor with or without nicotine from an e-cigarette or vaping device. The vapor contains fewer harmful substances than the smoke released by cigarettes, and no tobacco is burned. It does not produce smoke, ash, carbon monoxide, or tar, and the device itself does not require fire to operate. Are you interested in making the switch to vaping? Numerous benefits come with switching to vaping, including increasing mobility and health.

Illusions e-liquid comes with your standard vaping advantages, but also with Canadian manufacturing guarantees and ISO quality assurance standards. It’s one of the more palatable flavour sets out there too, with creative fusions like Rogue, Red Magic, and Nirvana. But are nicotine vaporizers with an e-liquid like these really better than a cigarette? Here are ten positive facts you should know about vaping before deciding to make the switch.

Vapor will not stain surfaces. Unlike cigarettes, which can leave unattractive stains on fabric, furniture, and fingers, there is no risk of spoiling due to vaping. A small amount of e-liquid may remain on the body of your e-cig or atomizer tank after use, but it will dissipate over time with proper cleaning and care.

There is a wide variety of e-liquid flavours. Unlike traditional cigarettes, which only come in a few varieties, there are numerous options available to consumers regarding e-liquid flavours. Whether you enjoy menthol, tobacco, or fruit-flavoured e-liquid, there will likely be an option that suits your tastes and preferences.

Not All E-Cigarettes Are Dangerous. Tens of thousands of people have successfully quit smoking with the help of vaping, but many e-cigarette users admit that they are addicted to nicotine. They prefer vaping because it does not contain carcinogens as does tobacco smoke and is much safer. However, some e-cigarettes out there still produce a large number of carcinogenic substances. Several brands are available in markets today, laced with potentially harmful chemicals, like diethylene glycol and propylene glycol.

You can set your e-cig or atomizer tank on a table, place it in your pocket, and go about your day without worrying about finding an ashtray. Unlike traditional cigarettes, you will never have to light your device or walk outside to smoke.

Many people enjoy vaping for various reasons, but vaping is simply a better alternative to cigarettes for many others. Unlike traditional cigarettes, which others can easily detect around you, vaping does not create a noticeable odour when used indoors. This means that if you are out with friends and want to enjoy a few puffs of vapor discreetly, you can do so without fear of embarrassment or ridicule.

Vaping does not burn the tongue or throat like smoking traditional cigarettes, and there is no unpleasant taste associated with the vapor produced.

There are more health benefits than nicotine alone. Many vapers enjoy e-liquid with zero nicotine content, providing even more health benefits than traditional cigarettes. In addition to the fact that nicotine helps regulate blood sugar levels, it also helps improve memory and boosts your mood. Some vapers report that they can quit smoking traditional cigarettes due to vaping.

In summary, no doubt, switching to vaping will benefit you in numerous ways. Vaping is beneficial not only to the smoker but also to those in their direct environment. While vaping is not as harmless as breathing clean air, it is still better than smoking cigarettes. When deciding if vaping can become a substitute for smoking, it is important to consider whether or not you want your loved ones and friends exposed to secondhand smoke. With that said, here are a few points that should be considered before making the switch to vaping.