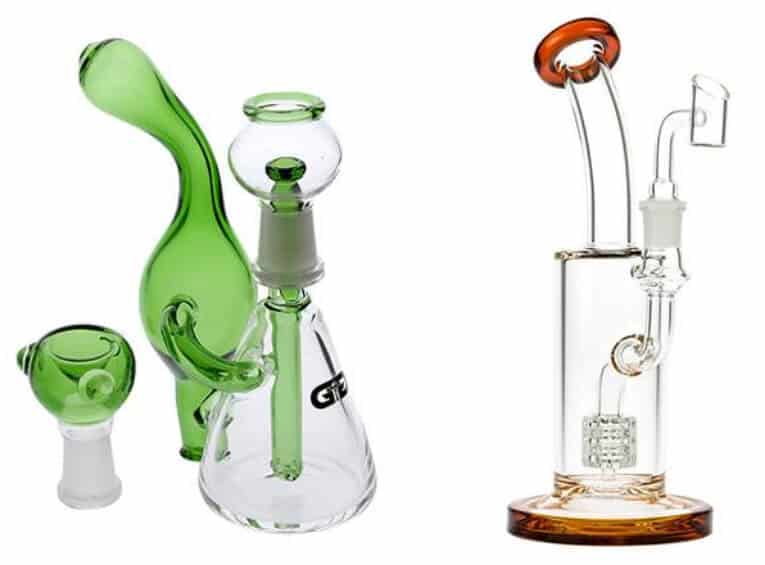 When it comes to smoking herbs, you may be spoilt for choice. There are several options for users to gauge before they can get to enjoy their herb. Some options include dab rigs, dry herb vaporizers, and bongs. With all these options, making the decision on which is the best for your needs can be difficult for a newbie but it does not have to be that complicated.

There are pros and cons to each option that users of marijuana need to weigh before making a choice. Depending on how fast you want the high, the environment of smoking, and other factors, one option may be a better fit for your needs. Considering the cost of any of these options, it is in your best interest to understand each option. Knowing that this may be difficult for many, this article will break it down, simply.

Bongs are the don of marijuana paraphernalia coming in all shapes and sizes. They are also known as water pipes or bubblers. It has an extended pipe that users place in their mouths to inhale marijuana smoke. They are so beautiful that some people choose to rather use them as decorations rather than actually use them for their intended purpose, smoking marijuana.

Places like Molino Glass have a range of bongs that double as artwork that can also provide a high-quality toke. One of the most popular types, the gravity bong, uses gravitational force to push the smoke into the chamber where it can be inhaled. While they may be difficult to make, the experience is out of this world for those looking to get extremely stoned. The advantages include smoother smoke, easy-to-use, easy-to-maintain, and provide large hits of smoke.

Dab rigs are also known as butane hash oil (BHO). They use potent cannabis concentrates which are heated on a heated nail. The heated concentrate produces vapor trapped in a glass globe that is inhaled by the smoker. The hash oil is the dab that is blowtorched. While this may seem scary to many, it is actually a healthier alternative than most other ways of smoking since it uses clean concentrates rather than combustible flowers that have many other contaminants.

The challenge with this method is that it has a poor image due to the effects of high THC extracts used in the process which can be very potent. This method is also deemed “the crack of pot” so approach with caution if you are not experienced using it.

These are arguably becoming one of the most used methods to smoke marijuana. They heat cannabis to release cannabinoids and other compounds into a vapor that is inhaled by the user. They use different heating methods, convection, and conduction, to create vapor and come in different forms either as desktop or portable versions. The advantage of vaporisers is that they are discreet and easier on the lungs since they produce vapor rather than smoke while releasing a less pungent odor than most conventional ways of smoking.

They also accommodate more forms of marijuana including waxes and oils. The godfather of vaporisers is the volcano which was too expensive for most in the past to access but with more portable versions such as the PAX 3 and Da Vinci IQ, more people are getting into using them.

Which is easiest to use?

The easiest to use will depend on some factors including where you smoke, how often and whether you are a beginner or veteran. Each method has different advantages, for example, vaporisers are the best for people who are always on the go and want to smoke on the go and want something easy to maintain.

They also come with less public shame because they almost look similar to e-cigarettes and are less pungent. They are better for beginners. Bongs and dab rigs are for more experienced smokers because they give a more concentrated effect from smoking marijuana and are better smoked at home or with other users comfortable with marijuana.

Smoking marijuana needs consideration for the best device for the process. Since you are spending hard-earned money, it is necessary to consider which method works best for your needs. It could be a bong, vaporiser or a dab rig. For beginners, vaporisers are a great start and with time progress to the others.