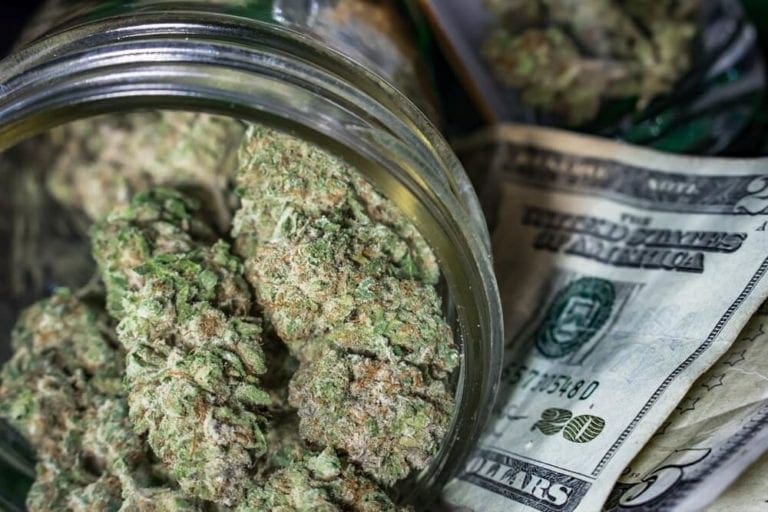 Let’s face it, the legality of Marijuana is spreading like wildfire in the United States, and one thing every investor is talking about is… Profit!

Cannabis, Grass, Pot, and other variants of the name, have been around for a long time, for recreational and medical uses. It is known for being the most commonly abused psychotropic drug up there right behind Alcohol.

Also, despite being illegal by Federal standards, it continues to find favor amongst young adults as studies indicate approximately 3.6 million young Americans are daily users.

Used recreationally, marijuana is consumed in the form of cigarettes, pipes, blunts, brewed as tea, or mixed into food to induce a sense of ‘calm’ or euphoria.

For medical application, medical cannabis has been shown in treating severe medical conditions like Cancer, Arthritis, Parkinson’s disease, and Alzheimer’s disease among other autonomic conditions.

Trends In the Marijuana Market

Since the late 20th century, there has been a growing movement in the United States to legalize Marijuana. California emerged as the first state to approve the decriminalization of pot for medicinal use in the treatment of symptoms of diseases like nausea, loss of appetite, and chronic muscle spasms.

With the total investment in Marijuana reaching a shocking $14 billion in 2018, many thanks to the unyielding and ever-increasing rate of consumption, the industry showed no signs of slowing down. This welcome improvement made it quite obvious cannabis was going from being banal to being a multi-billion dollar industry.

Following the legalization of recreational use of Marijuana in Ten states in the U.S and medical approval in Thirty-three, marijuana stocks are starting to look like a tempting investment, albeit still in its early stages of growth. And this implies risk. However, it also begs the million-dollar question of whether it is a good idea to invest in leaves now.

Marijuana stocks are great. For one, Thanks to the budding legalization movements that span across the country, interest in marijuana is expected to increase over the next couple of years. This in turn will set the Marijuana U.S. cannabis market up to create a whopping sum of at least $80 billion by 2030.

While  2030 might seem like light years away for your average investor, investing in the marijuana industry can offer substantial gains in the long term, given you can shoulder the risks properly. That being said, investment should be with money you consider “safe” to lose, just in case. Not your retirement funds or your child’s college savings.

Another reason why you should consider investing in this stock market with huge potential is the diverse number of strains and products available. This will result in the continuous expansion of the Cannabis market. As legalization continues to spread and gain footing in other states, and hopefully globally, demand will continue to grow.

Marijuana Trend In Other Countries

Outside the US, countries like Uruguay, Peru, Spain, and South Africa have ordered and implemented the decriminalization of Marijuana while Canada boasts of having the biggest marijuana market, having fully legalized cannabis in 2018 and its derivatives in 2019.

Marijuana’s legal status in Canada paves the way for pot companies to be traded freely on the country’s market exchange. Plenty of U.S. companies and Canadian businesses involved in, one way or the other, with Marijuana are publicly traded U.S stock markets and as legalization continues to spread, more countries are expected to join the listings, giving the sector a huge boost.

There is little doubt that the Marijuana industry is going to deliver huge revenue in the years to come. This however is going to require quite a lot of persistence and ability to gamble on the side of the investor.

Now, you are ready to venture into the Cannabis stock market. Or so you think. ‘What else is there to know?’, you might ask. Well, quite frankly, a stock is a stock. Yes. But unlike others, the marijuana stock carries added risk.

That being said, it is important to note that this is a budding, burgeoning industry whose main product is still considered illicit at the Federal level.

Before you whip out those mint notes and wander off in search of a Marijuana stock, here are five fundamental rules all investors -and potential investors- should stick to while dealing in the Marijuana sector:

This cannot be stressed enough. All stocks are generally considered a big risk but due to the freshness of this sector, which makes it volatile, Marijuana stock should be approached with care.

Firstly, Marijuana, although decriminalized in states, is still considered a Schedule 1 drug at the federal level. This industry has specific regulatory rules that should be kept in mind at all times.

For this reason, weed being considered illegal by the feds, the banking sector is very reluctant to be caught in the same sack as the marijuana sector, therefore making dealing with this sector in any kind very difficult. Inability to get loans to pull into your marijuana investment might constitute quite a problem.

Secondly, because this market is very young and volatile, you, as a rule of thumb, should only ever invest with money you can afford to make losses on. No more than that!

While the stock might be doing well for itself, there is no assurance, just as there never is with any stock, that it will last forever. Some of your marijuana stocks are going to hit the jackpot and some are probably not. Always leave room for ‘what if’s’ and do not go pooling in your life savings.

Consider this a dicey, iffy, unpredictable yet profitable bet.

2. Spread Out Your Investment

The second most important rule is almost quite obvious. ‘Never put all your eggs in one basket!’

As an investor new in the ways of the grass, always resist the temptation to go too heavily into one single company no matter how strong the stock seems. It’s an extremely bad idea. You don’t want to find out what happens when you do.

This doesn’t imply that you shouldn’t deal with strong Marijuana stocks, far from it. Caution is simply advised.

As a means of safety when choosing marijuana stocks and companies to trade with, ensure your protection by diversifying across different companies.

One means of avoiding the disaster that comes with losing stock is investing in Exchange-traded funds, ETFs. They are a means of pooling money from various investors and ‘spreading’ or diversifying the funds, allocating them across companies. Risk management at its finest.

3. Do Not Focus on the Hype

Venturing into the U.S. Marijuana market, although having huge potential, is no walk in the park. There is nothing magical about the marijuana market that makes it an instantly better option for investment than other markets.

Although the marijuana market is set high and projected to go higher in the nearest future, you are not immediately going to become the next big multi-billionaire, don’t let the marketers convince you otherwise.

Don’t base on word of mouth. Evaluate your prospects properly before dealing with the industries you deem fit and do so realistically. For example, before buying a stock just because it is trending, ask yourself these questions:

Be smart and know your way around. Play it safe. One way of doing this is knowing the leaders in the marijuana industry and picking some stocks from their companies. Some, not all. Remember rule number 2 and diversify.

Think about it. If they are leading, that means they have to be doing something right, right? For example, in the Canadian market, Canopy Growth Corporation and Medreleaf currently claim the highest revenues in the game.

Of course, the size of a company’s proceeds is not always everything, but keep in mind it is a promise of a higher chance of survival in case of a storm. Because none of this is available in the United States, it is advisable to do your research and know what works for you.

Another point to know is as annoying as it sounds, there are people eager to rip you off your hard-earned money. As if the fear of marijuana’s volatility isn’t enough, you have to keep your eyes peeled for unlicensed individuals or ‘companies’ who promise massive returns in a very short amount of time. If it looks too good to be true, it most probably isn’t true.

5. Invest With a Long-Term Perspective

This isn’t a quick money scheme. While the industry has a potential for exponential growth, investing long-term would still be needed here.

In the long run, as long as legalization is accepted in more and more countries in the following months and years to come, investing in the Marijuana sector is going to be one of the best moves you ever made.

Again, do not invest with money you can’t bear to make losses on. While they might not look like it, long term investments are the best type of investments.

After all, like Warren Buffett said, “If you aren’t thinking about owning a stock for ten years, don’t even think about owning it for ten minutes.”

The marijuana stock market, although fraught with risks, is one looked upon by investors as having tremendous opportunities. Unstable, yes, but with potential that is just waiting to happen. Recall that the biggest risk in life is not taking risks.