The pod vapes used to be treated as an oddity by a lot of consumers. However, they evolved from the product that no one asked for to the inescapable upgrade that really took over the market in the last couple of years. Right now, the vape pods developed into a whole new category of the most popular vaping devices out there.

The RPM40 Kit from SMOK is a beautiful vape device designed with a compact and ergonomic body design, with a large internal battery capacity, and mesh coil compatibility to optimize flavor production. This pod device is available in 8 unique colors.

A cuboid body design offers an ergonomic grip and compact dimensions. A 0.96″ TFT display screen is located on the front face of the device. The new IQ-R chipset features a user control suite that allows changes to color settings and background, output adjustments, and access to other user modes.

This device is powered by a 1500mAh rechargeable internal battery.

The upgraded version of the original Novo Pod device, with breathtaking color options and a larger internal battery.

The SMOK Novo 2 is a beautiful pod device that features incredible resin and other creative color options that give your vaping experience a unique twist. A larger battery capacity and classic draw-activated firing design is also featured.

This device is powered by a 800mAh rechargeable internal battery and features a 2mL pod cartridge.

The VINCI X also incorporates a few exciting features like an innovative “PUFF Curve” setting that allows you to record up to two weeks of activity; this comes in handy as it conveniently provides insight of your overall usage. Additionally, the GENE.AI chip inside the VINCI X intelligently regulates power sent to the coil, which helps extend its useful life and save money on replacement coils.

Powered by a single 18650 battery (not included) installed at the bottom behind a threaded battery cap, the VOOPOO VINCI X can last significantly longer between recharges then its predecessors’ internal battery and gives it much more power in flexibility all around. Lastly, with the 0.96 inch TFT color screen mounted on one side, the VINCI X allows you to see the battery status, current setting, and visibly navigate the menu without hassle.

Caliburn Pod Kit is the first vape pod system by Uwell. It offers simple user operation, fits comfortably in your hand, and is quite visually appealing with a streamlined shape and sleek, slim body. The Caliburn tank is a trapezoid shape pod tank designed to fit nicely against your lips, and it’s fully compatible with salt nic juice.

The Uwell Caliburn pod system features dual-firing capabilities allowing it to be Draw Activated or Button Activated. The internal 520mAh built-in battery supports a maximum of 11watts at full power, and the Caliburn pods use Uwell’s proprietary Pro-FOCS flavor technology to enhance flavor and provide a more pleasant vaping experience.

More Pod Mods are in our Catalog

So the pod system vape devices are on everybody’s A-list now, and there’s the reason for them to be so appreciated. Indeed, the pod vape items meet and often exceed all the expectations when it comes to e-cigarettes. They are very convenient in use, and oftentimes, these portable devices have an incredible design. 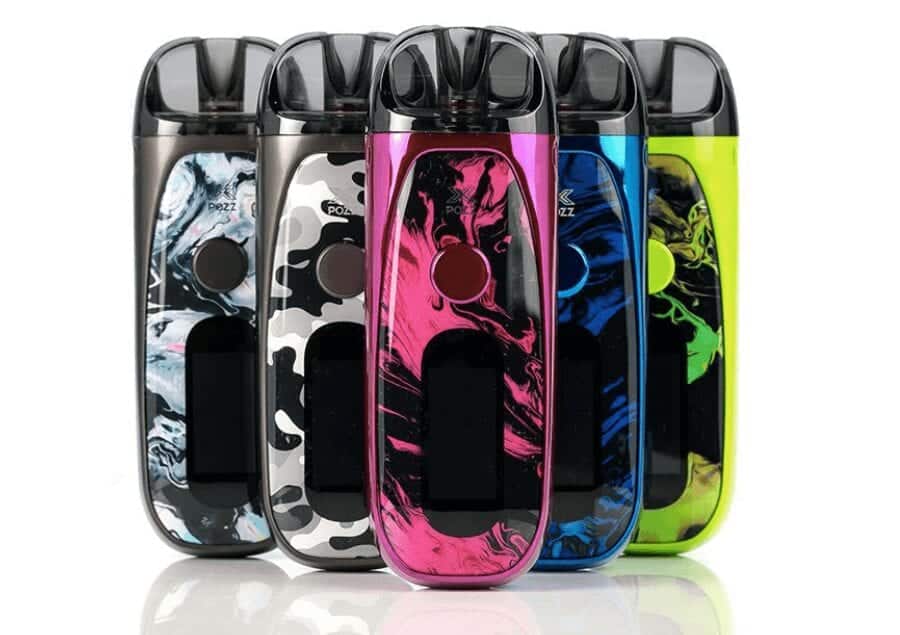 When the vape pods first emerged on the market, most of them had the closed system vape kit structure. In other words, the user could vape only those disposable factory pre-filled cartridges, and there was no such option as putting some other e-juice in it. This was a bit of a problem, but luckily, things have changed since that time.

The pod mod vape as we know it now can be an open system equipped with the refillable cartridges. Not to mention, many devices have inbuilt tanks in their minuscule frames, which is totally awesome.

The on-board reservoirs and the refillable cartridges are just some of the changes that happened to the pod mod devices in the last few years. The devices keep getting better, and the market meets more and more new models of vape pods as time goes by. It can be hard to know which one of them is the best pod mod vape for you.

That is why we decided to shed some light on this topic. Below, you’ll find out some pod mod vape basics, how they work, and how to choose the best pod vape device, alongside with the list of our top picks.

What is Pod Mod?

The pod mod is an electronic device for vaping, which is very small in size, easy to use, and very often equipped with the pre-filled cartridges. The basic structure of every device is the same, and there is a battery with an open slot, into which the user inserts the pods to start vaping.

Pod vapes are very similar to other vaping devices as their mechanism in the same. They consist of the tank (a cartridge) with a coil, and in order to produce the vapor, the coil hits the wick setup. The only significant difference is that the pod system is much smaller than the one in the majority of other vaping devices, and thus it is easier to use.

The pod mod activates when you draw the air through the mouthpiece. This action prompts the sensor inside the device and the coil starts to heat up.

Some vape pods still have a button for activation, but this feature is very rare because it is unnecessary in modern devices. In most cases, the coil starts to saturate as soon as you attach the pod to the mod. Given that the output has very low power, it doesn’t take much effort to initiate the vaping.

Normally, the devices like this have much lower capacity than the box mods, but some products support the batteries of higher capacity; the higher the wattage, the bigger the clouds.

The first and most impressive feature that makes vape pods different from other vaping devices is the draw activation. As we’ve already mentioned, the majority of such devices don’t have the power button. The pod mod system is not as heavy as one of the pen-style vaporizers or box mods, hence it has the batteries of a lower capacity with the voltage that ranges between 100mAh and 900mAh.

So the vape pods are really tiny, they have a small battery capacity, and there is almost no way for you to customize them. However, this is not a disadvantage but rather a part of their appeal. The devices are extra comfortable. They don’t require much maintenance efforts and you don’t need to have any experience to get a handle on the pod mod system. 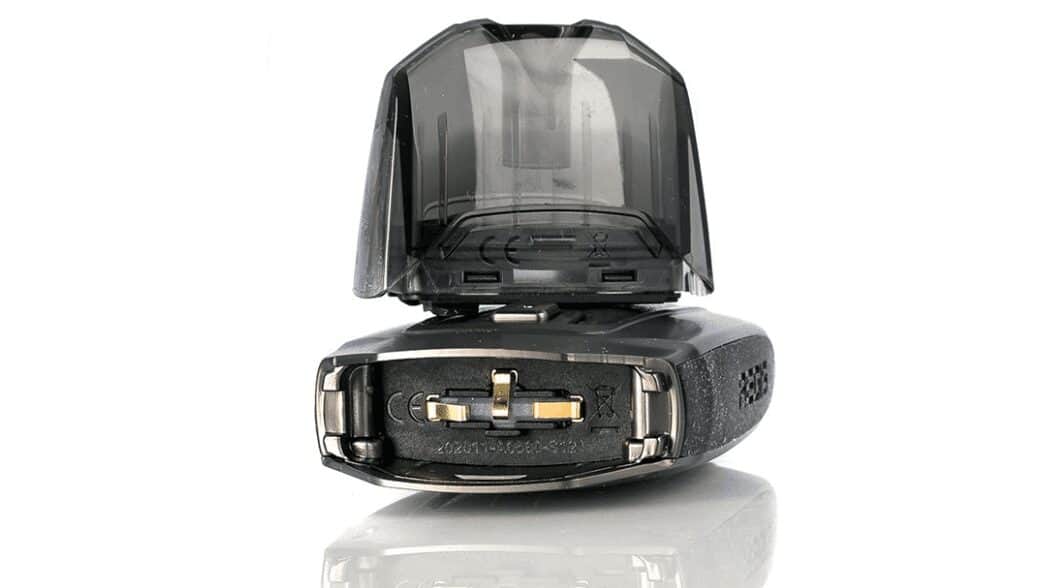 The pod mod vape devices are usually pre-filled with an e-juice and they have inbuilt coils, which adds to their simplicity. The users don’t need to build their own coils or think about the conductivity and coil resistance. Also, the pods are disposable, meaning that all you need to do for a refill is to replace the used item with the new one.

An open or closed system also called open or closed-loop is a characteristic that describes what kind of cartridges are supported by a particular device – refillable or pre-filled (or in some cases both). There are the supporters and haters of each pod mod system as both of them have the perks and drawbacks.

Speaking about the closed system, there is one apparent reason not to like it. The user can only vape the e-juice from the pre-filled cartridges, and oftentimes, the selection of the latter is quite limited. Moreover, some pods use the nicotine salts instead of the VG/PG e-juice mixes.

The concentration of nicotine in salts is much higher compared with e-juices. Vaping the nicotine salts is very similar to traditional smoking with the throat and mouth-to-lung hits. As the vape pods were gaining popularity, the companies had to provide bigger choice to the vapers in terms of both the flavor of e-juices and the design of the devices.

Many brands came up with as many flavor choices as possible. That is why the partnership between the manufacturers of pod mod vape devices and e-juices has become very common.

Still, there is one major advantage of the closed systems. It is an easy replacement of cartridges. Not only the users don’t need to refill but also they don’t have to worry about the coil replacement or purchase the tank in case it gets damaged.

The open system emerged as a reaction to the demand of the market. Some companies came up with the vape pods with the inbuilt reservoirs and tanks so that the vapers could use the e-juice that they like.

After all, it doesn’t make any difference whether the system is open or closed. Both pod system vape devices are incredibly stylish and super portable.

What the Future Holds for the Pod Mods

On the whole, these products are pretty complete already. There is a battery, e-juice, wicks, coils, which is basically everything that an average vaper needs. The vape pods are really tiny though, and they are non-customizable. However, these things are more like features rather than some kind of a disadvantage.

The pod vape devices have occupied their distinct place in the market. They do not compete with box mods or vape pens. On the contrary, their competitive advantage is in the simplicity. The pod mods are perfect for the vaping newbies as they don’t expect the user to have any background knowledge to start vaping.

The vape pod devices are great in attracting the prospect vapers who consider vaping. They are easy in use and very similar to smoking. Therefore, if you decide to shift from tobacco to vaping, there are dozens of companies that will provide you with a wide selection of vape mods in different styles.

All in all, the vape pods have a minimalistic design and very simple set-up, but they remain innovative. We are thrilled to see how the vape pods will change in the future.