Currently, the vape market astonishes its customers with a wide variety of vape tanks. The number of available vape tanks is measured in hundreds, which makes it really difficult for a customer to find the best vape tank in the abundance of offered options.

In addition, the CROWN 5 is compatible with several options of Mesh coils for a personalized vape experience, including a 0.23ohm single mesh coil and 0.3ohm dual mesh coil or a 0.2ohm triple mesh coil (sold separately).

UWELL also incorporated its patented self-cleaning technology in the CROWN 5 tanks to absorb the e-juice or condensation through regular vaping, reducing juice leakage and lessening the cleaning frequency.

4ml of capacity, 25mm in width and a built in coil fan. The Limitless XL Sub Ohm Tank is for the power vaper who does not wish to sacrifice flavor to gain bigger clouds. A true sub ohm tank in every aspect, this is a definite contender to join every vape collection.

Constructed from durable stainless steel and holds up to 7.5mL of eJuice in the bubble glass tank allows users to extend times between refilling. The TFV18 coil design is made to be super simple and easy to install with a plug ‘n’ play concept, keeping coil changes quick, concise, and mess-free.

The TFV18 Tank can facilitate both MTL or DL vaping while also offering the fully-closable dual slotted bottom airflow intakes to customize your vaping experience.

Never settle for a sub ohm tank that does not have all of the product features many of us require when vaping. Uwell is known for creating several pieces of hardware and accessories from high-quality materials. They are now introducing us to the Whirl 2 Sub Ohm Tank, which is excellently-crafted to provide us with a unique and memorable experience.

The tank has a compact size and a superior 304 stainless steel construction that allows it to be durable and long-lasting. It can hold a maximum vape juice capacity of 3.5ml, and this amount should last many of quite a while before it is time to refill. When serving ourselves some more of the mouthwatering blend, the quarter-turn top-fill system will be of assistance. Compatible with the Uwell Whirl Coil series, appreciate the two different coils that are included in the packaging.

One is the 0.6ohm dual coil, and the other is a 1.8ohm single coil. Each one offers something special to every vape hit that makes each coil stand out. The press-fit coil installation will make it simple to swap out coils whenever necessary. Available in several attractive colors, pick out the tank that looks most vibrant and start puffing away.

The GEEKVAPE Cerberus sub-ohm tank provides excellent flavor delivery and fantastic cloud production. The Cerebus tank is designed to work with the NEW with the innovative Super mesh coils, which help produce incredible amounts of flavor and vapor.

This Sub Ohm tank uses a top filling system with a large e-juice capacity of 5.5ml and has an integrated adjustable airflow inlet for maximum performance. 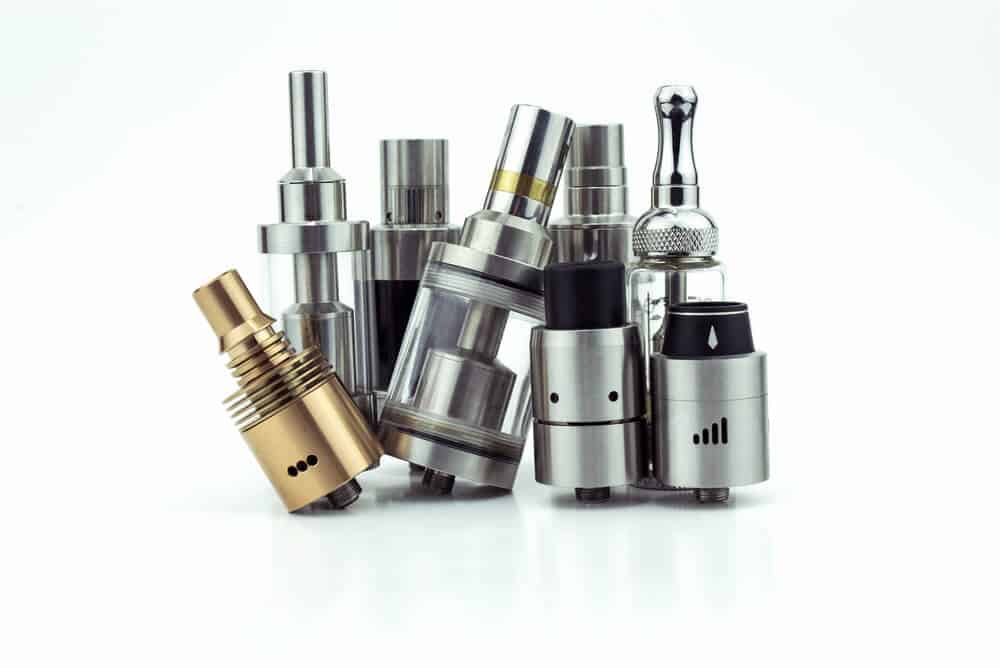 How to Choose the Best Vape Tank

Having decided to purchase a vape tank, a person considers a set of factors that include but are not limited to product characteristics (like resistance rating and tank capacity), cost, payment, and delivery conditions.

Let’s get the definition right first. A vape tank is a component part of a vaporizer that contains an e liquid and a heating element. As a rule, a vape tank is made of metal (anodized aluminum and stainless steel), pyrex, and plastic. So, how to make a choice that will facilitate your vaping experience?

Glassomizer, Clearomizer, or Cartomizer – Which Tank to Choose? 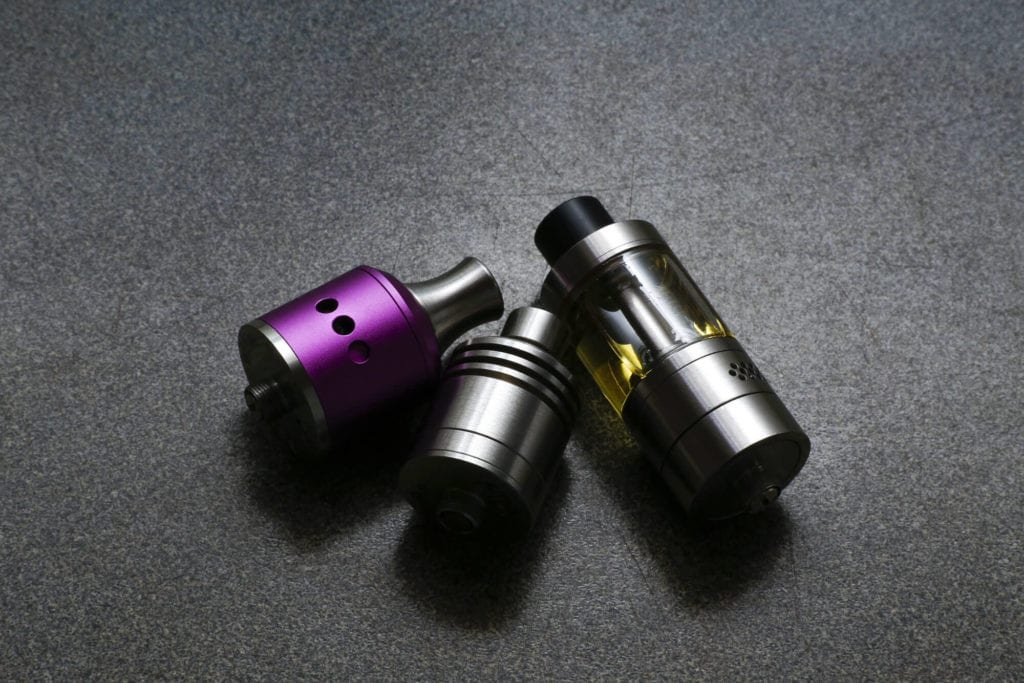 The three options seem similar at first sight, but a more in-depth analysis reveals significant distinctions that can influence your choice. Glassomizer and clearomizer are two very similar devices, the only difference between them is that the glassomizer has a pyrex glass reservoir, and a clearomizer has a plastic one that can undergo erosion due to the long-term contact with the e-liquid that contains acid (Some e-liquids contain citric acid that helps to preserve the liquid. While it is completely safe for the human body, it can erode plastic over time).

As for the cartomizer, it is a tank that contains wicking material that absorbs e-liquid. When the battery gets activated, the e-liquid gets heated by the coil.

A clearomizer, being similar to cartomizer as well, doesn’t have cotton. In this device, wicks absorb the e-liquid and hold it in the reservoir. This way, all a vaper needs to do is refill their e-liquid tank after a couple of hits. 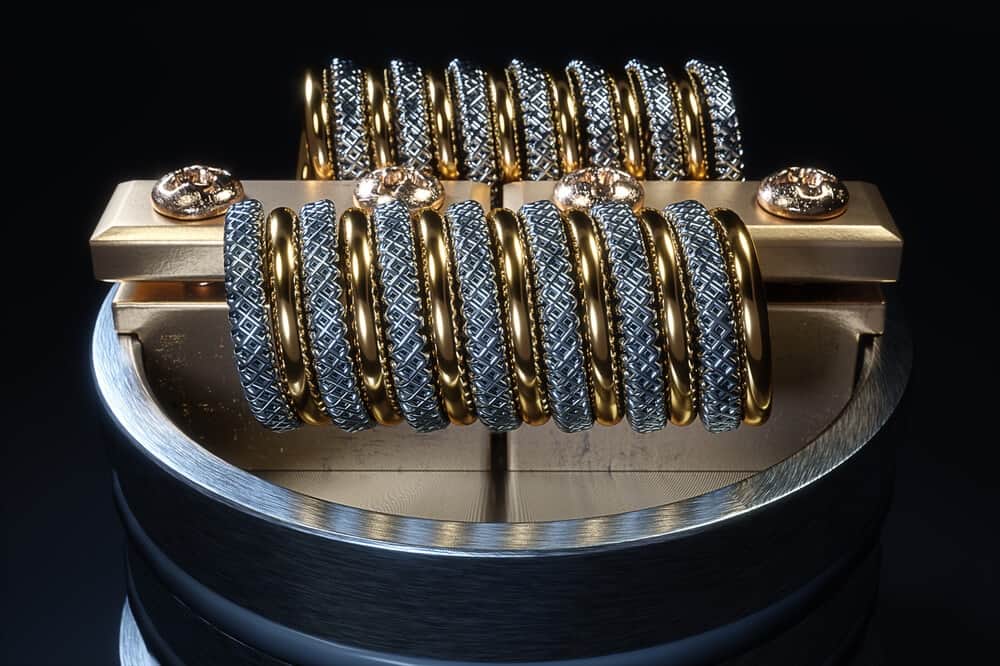 A vaping tank contains a coil or several coils inside of it. The majority of brands offering personal vaporizers make pre-built coils. This way, a vaper can easily replace a burned one by screwing. However, it is not the only available choice.

Some experienced vapers prefer to build their own coils and thus need a vape tank that has a buildable deck. Such custom coil tanks are often referred to as box mod tanks.

The resistance level of a vaping tank determines the amount of its vapor production. The lower the resistance is, the more vapor is produced.

Users often find the vaping process at lower wattages more satisfying when the resistance is higher. Sub-ohm vapers believe that lower resistance rating will deliver a better experience for them.

One more critical factor in choosing the best vape tank is its airflow options. The experience of vaping depends on the amount of the airflow of your vape tank.

Vapers who want to achieve experience similar to smoking choose limited airflow, while a maximum airflow will deliver the best experience to those preferring a smooth vaping process.

The choice of vape tanks is huge. Still, they all can be divided into two categories based on the draw principle, namely direct-lung or mouth-to-lung. Direct-lung vape tanks allow you to pull the vapor into your lungs directly with one motion, as their air holes are big and the draw you get is loose.

Using a mouth-to-lung tank, you will get an experience similar to smoking actual tobacco cigarettes, when you take a draw, and then inhale.

In most vape tanks, the airflow is adjustable so that direct-lung and mouth-to-lung vapers all have the best vaping experience. Below is the explanation of differences between DL and MTL tanks and their peculiarities that will allow you to pick the best vape tank for the flavor you prefer. 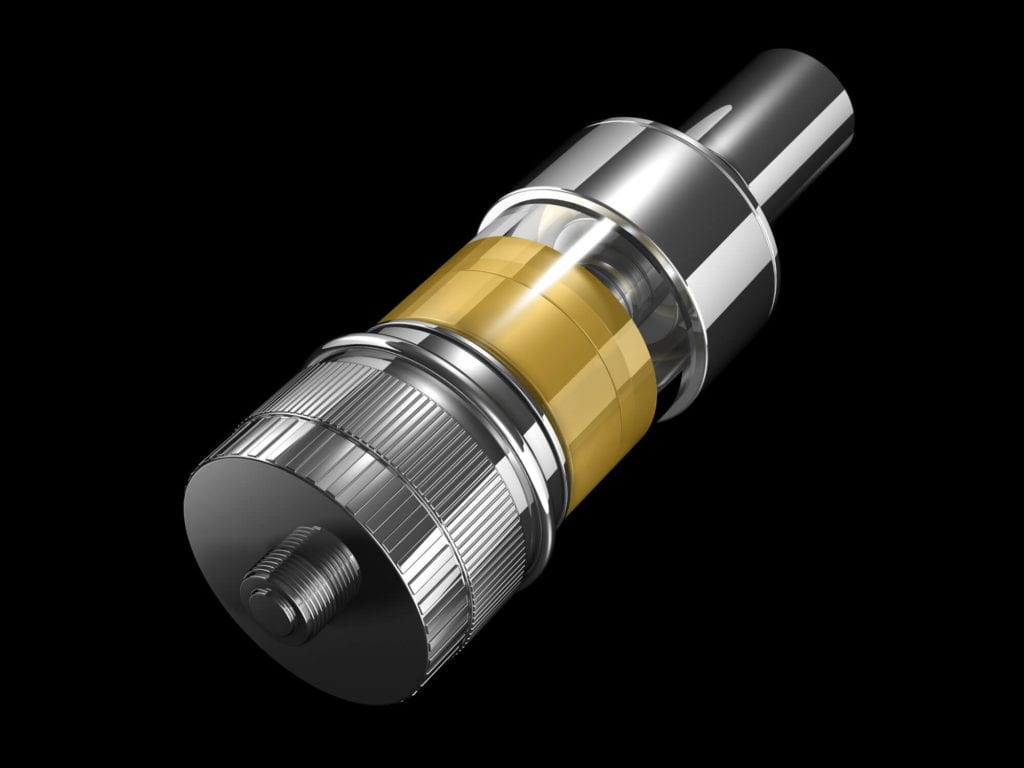 MTL (mouth-to-lung) vape tanks saw the world first. They were installed on the first vaporizers, and their primary purpose was to imitate the experience of smoking a cigarette.

Such a container has a tight draw, so a two-step inhalation process is required. One will not be able to puff vast clouds of vapor with the help of this type of tank.

There is a popular false belief that MTL tanks are only for beginners. Even though they are preferable for beginner vapers, they can deliver the best vaping experience to any vaper, regardless of their experience.

Speaking of used liquids, it is worth noting that MTL-vapor tanks work better with thinner viscosity e-liquids (do not extend 60/40 ratio of VG vs PG). 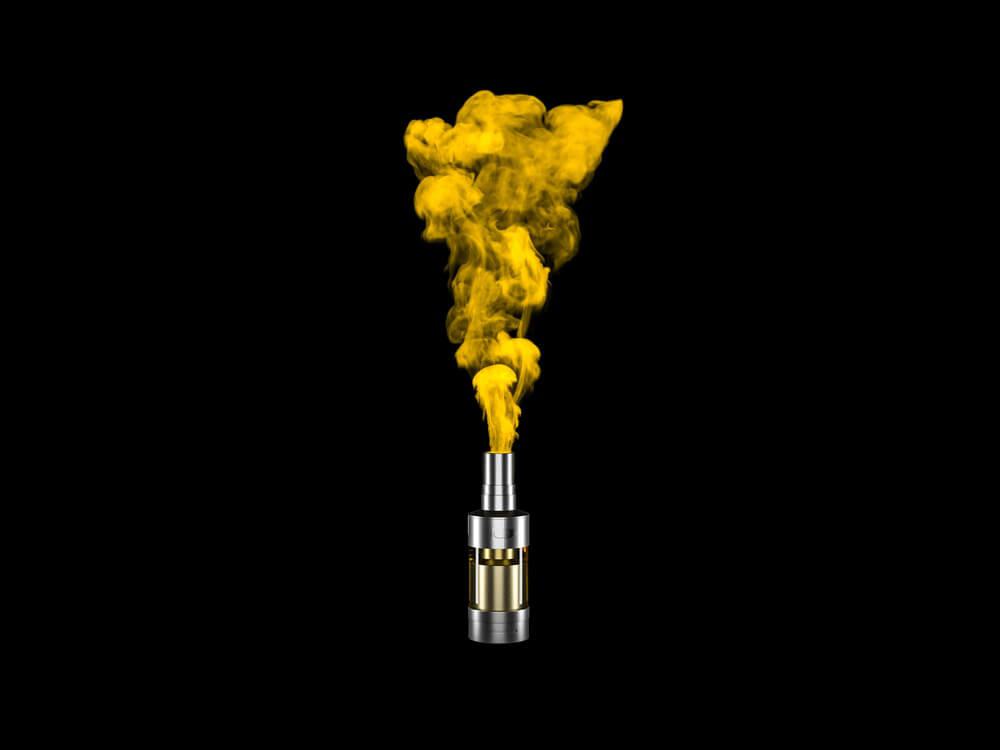 DL (direct-lung) tanks, also referred to as sub-ohm tanks, derived from MTL tanks that we discussed above. If you use such a tank, you will experience a one-step process of inhaling vapor, pulling it directly into your lungs.

We already wrote that MTL tanks give an experience that resembles smoking actual cigarettes.

In this context, MTL tanks offer an experience similar to bong rips. You will get a looser draw and a larger airflow, like the one of a water pipe or a bong.

DL tanks are also sometimes called sub-ohm tanks because their coil resistance is less than 1 ohm. For this reason, a user gets warmer vapor and more flavor. The amount of vapor you can get with DL tanks is enormous. Thus, direct-lung vape tanks are the best vape tank for clouds.

It is also worth noting that direct-lung vape tanks work well with thick liquids that do not fit MTL tanks. When used with thinner e-liquids, you might experience leakage, because such tanks have juice flow holes and big airflow meant to deliver enormous clouds of vapor. 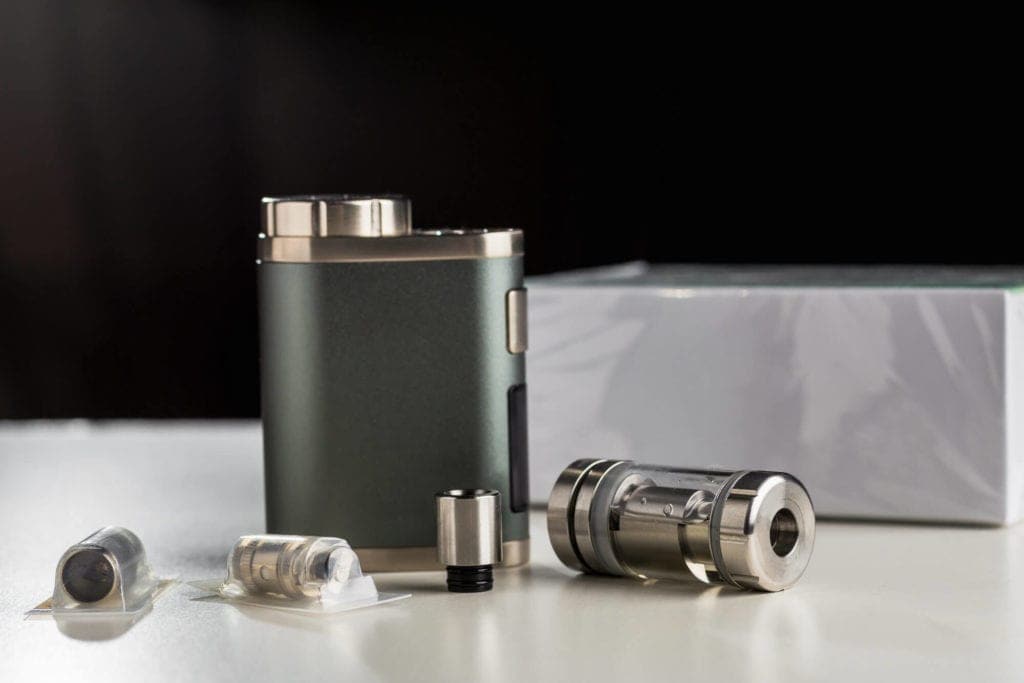 Now you know how to choose the best vape tank that will give you the best vaping experience. Based on the process you want to get (similar to smoking or water-pipe) and the e-liquid you wish to use (thick or thin) you will be able to choose what fits you best.

Also, opting for a higher-quality material (metal over plastic) will save your budget in the long run.