In this article we shall define sub-ohm tanks, also called sub tanks, sub ohm clearomizers or sub ohm clearo tanks). This name stands for any atomizer which has a resistance that is less than 1.0 ohm.

It refers both to devices that employ one or multiple coils. When many coils are used, then the collective resistance of all coils is taken into consideration.

In addition, the CROWN 5 is compatible with several options of Mesh coils for a personalized vape experience, including a 0.23ohm single mesh coil and 0.3ohm dual mesh coil or a 0.2ohm triple mesh coil (sold separately).

UWELL also incorporated its patented self-cleaning technology in the CROWN 5 tanks to absorb the e-juice or condensation through regular vaping, reducing juice leakage and lessening the cleaning frequency.

4ml of capacity, 25mm in width and a built in coil fan. The Limitless XL Sub Ohm Tank is for the power vaper who does not wish to sacrifice flavor to gain bigger clouds. A true sub ohm tank in every aspect, this is a definite contender to join every vape collection.

Constructed from durable stainless steel and holds up to 7.5mL of eJuice in the bubble glass tank allows users to extend times between refilling. The TFV18 coil design is made to be super simple and easy to install with a plug ‘n’ play concept, keeping coil changes quick, concise, and mess-free.

The TFV18 Tank can facilitate both MTL or DL vaping while also offering the fully-closable dual slotted bottom airflow intakes to customize your vaping experience.

Never settle for a sub ohm tank that does not have all of the product features many of us require when vaping. Uwell is known for creating several pieces of hardware and accessories from high-quality materials. They are now introducing us to the Whirl 2 Sub Ohm Tank, which is excellently-crafted to provide us with a unique and memorable experience.

The tank has a compact size and a superior 304 stainless steel construction that allows it to be durable and long-lasting. It can hold a maximum vape juice capacity of 3.5ml, and this amount should last many of quite a while before it is time to refill. When serving ourselves some more of the mouthwatering blend, the quarter-turn top-fill system will be of assistance. Compatible with the Uwell Whirl Coil series, appreciate the two different coils that are included in the packaging.

One is the 0.6ohm dual coil, and the other is a 1.8ohm single coil. Each one offers something special to every vape hit that makes each coil stand out. The press-fit coil installation will make it simple to swap out coils whenever necessary. Available in several attractive colors, pick out the tank that looks most vibrant and start puffing away.

The GEEKVAPE Cerberus sub-ohm tank provides excellent flavor delivery and fantastic cloud production. The Cerebus tank is designed to work with the NEW with the innovative Super mesh coils, which help produce incredible amounts of flavor and vapor.

This Sub Ohm tank uses a top filling system with a large e-juice capacity of 5.5ml and has an integrated adjustable airflow inlet for maximum performance.

More sub-ohm tanks are in our Catalog

In the course of time, the term acquired additional meaning and became a marketing name for a device featuring specific characteristics, like a pre-made factory-built removable and replaceable atomizer head that attaches to the base of the tank. Therefore, the sub-ohm tank is both the generic and the marketing name. 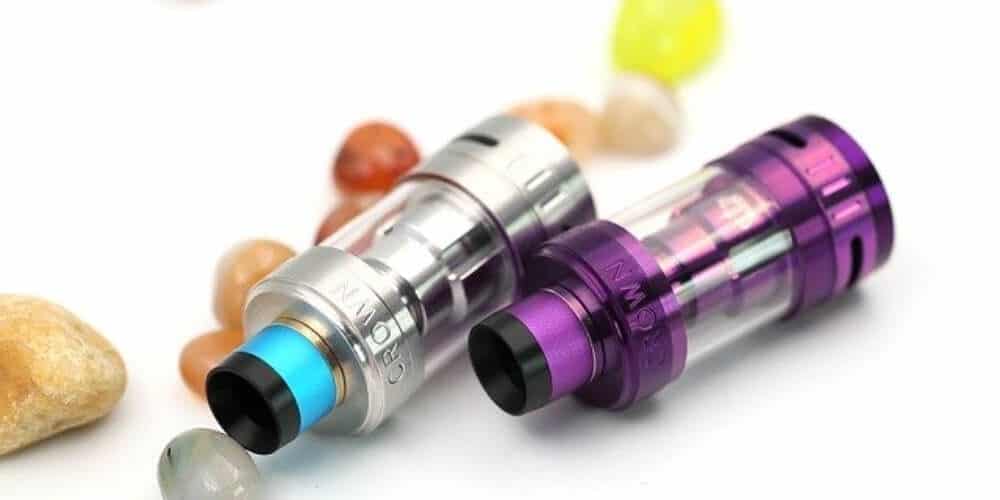 The evolution of atomizers

The atomizer development took several stages. The first point of evolution was dripping atomizers. They employed a coil on the ceramic base inside a cylindrical metallic shell. The latter attached to the bottom of a power source (mod) utilizing a threaded connector. E-liquid traveled directly onto the coil through the open end of the tube.

The manufacturer later customized some of the atomizers by selling them as two appropriate sections: a cylindrical one, containing the coil, and the second one for the wicking material.

The clearomizers were the second stage of evolution. This type was constructed as a cylindrical metal tube with an electrical connector at the one hand and an opening on the other. The wicking material usually wrapped the vertical coil. E-liquid traveled from the opening to saturate the wick.

The latter was often a piece of silica polyester or some unusual materials like blue foam. Clearomizers favored longevity and the joy of vape free from recent refills.

The creators of a clearomizer tank remodeled the predecessors by adding the holes, punched or drilled into the metal tube. The clearomizer entered the sealed container from glass or plastic containing a substantial amount of e-liquid. The operation based on the differences in pressure inside the tank.

As the user inhaled the pressure dropped, and the e-liquid moved to saturate the wick. The first items of this kind were homemade remodeled syringes cut into sections.

They took away the punched tubes inside the tanks. The first successful trademark was Stardust Tanks, called CE4s. Those were also famous as the first disposable tanks. 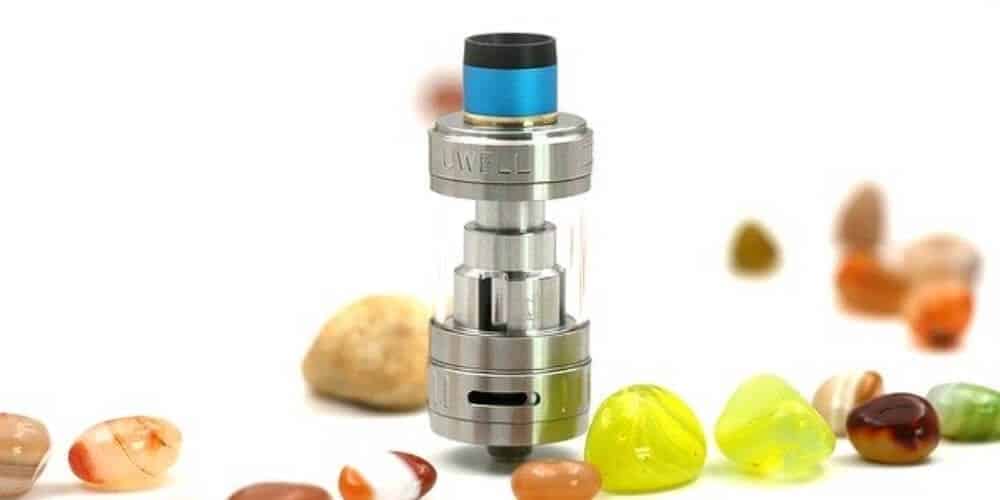 As further remodeling followed, the CE4 disposables later upgraded to non-disposable tanks with removable heads. All of the tools mentioned above featured the coil resistance from 1.25 to 5 ohm, but it never dropped down below one ohm, so there was a lot of space for improvements.

The sub-ohm tanks caused the big waves on the vaping market. It all started with realizing that low resistance gives more power and more power results in other benefits like the better flavor or thick vapor. The vaping community took use from the Ohm’s law, and many vapers learned about electricity more than they did at school.

The Aspire Atlantis busted into the market as the first successful sub-ohm tank, and soon the Kanger Subtank followed. They featured removable coil heads with resistance not higher than 0.5 ohms.

The new sub ohm tanks were something fresh for the audience to digest, and they gained popularity fast. Soon every respected manufacturer took up sub-ohm tank modification and remodeled, improved, and updated the existed units to win the fast-growing competition.

They customized coils (offering horizontal or vertical variants), wicking (experimenting with organic cotton in numerous configurations), and surpassed each other in achieving the lowest coil resistance possible, reducing it to 0.15 ohms employing nickel Ni200 coils. That all done in the competition for the title of the best sub ohm tank on the market.

The first clearomizer tank saw the light of the day in 2015. And 2016 gave birth to the first RTA vape. The devices flew up the market quite fast, and there was time for the cutthroat race. Although sub ohm clearo tanks produced a fantastic experience, the RTA started to win the vaping audience.

The Differences between Sub-ohm Tanks and RTAs

The difference between the two types of devices is straightforward to explain. Sub-ohm tanks have pre-built factory coil heads, and the rebuildable atomizers offer you only a deck and a possibility to install the customer’s coils and wicks on it. The coil heads used with RTA can be either homemade or purchased.

As we know everything changes and if a device features market-winning characteristics, the manufacturers tend to stuff all of their hardware with what’s in trend.

So is with the vapes and we now can find best sub ohm tanks with rebuildable deck heads. A user benefits from the possibility to choose sub ohm factory heads or build their coil heads. The further development shook the things up even more.

The primary distinction of the RTAs was spacious, high-quality build decks, and it’s not a surprise that some of the clearo tanks improve their decks to maximize the quality.

All the picture reminds of a race of features, and the RTA segment thrives on being up the market. Therefore new traits and attributes appear all the time. Still, not all of them are sharable.

For instance, e-liquid control quality present in RTAs is missing with sun-ohm tanks, but the latter are incomparable in the quality of vapor and flavor, and therefore the word combinations best flavor and sub-ohm tank have become inseparable.

Most of the Google quarries in the area of sub-ohm vaping include search phrases like best sub ohm tank for flavor or best flavor sub ohm tank.

How to get most of your sub-ohm tanks?

The “priming” is about moisturizing the coil head before the first use. The whole procedure is quite simple. You have to drip some of the e-liquid to the head’s holes and slots, so the wicking gets wet. 2-4 drops of e-liquid are applied directly to the coils and wicks.

The head needs about ten minutes for complete absorption. If this time pause is not maintained and an inpatient user starts to vape faster the vape cotton may burn, as some parts of it are still dry.

It is better to start at a lower wattage, for example, 20 watts. Of course, in the beginning, you’ll have to sacrifice the flavor and vapor, but it’s not the highest price to pay for the longevity of your coils. It is better to do less in a greater way and raise the wattage in steps over some minutes or even hours.

This way you let the coil head ease into operation and prepare it for the long-term use. The gradual break-in is essential, as heating your device at 70 watts for the first time will bring about dramatic damage.

Despite our strong love to vaping, we cannot escape mentioning the fact that the whole process is a bit messy. Whatever type of vape you use, the set of tissue or paper is always a great thing to keep at hand.

There are two main underwater currents when using the coil heads. They either gunk up piling burnt carbon or get the burnt wick, which loses its ability to saturate the e-liquid. And although we’d fancy the eternal coil heads, those don’t yet exist.

The vaping fans expect new findings in the sphere of plate technologies, but still, there aren’t any inventions that would fit all of the requirements.

So, to have your device up and ready to serve you, keep the coils fresh. If it is not so, you get the funky reduced flavor. The lousy taste is the first indicator of coil aging, but it comes about gradually, and a user may get accustomed to the changed quality without even noticing it.

Therefore the visual examination is required. Make it your habit to examine the coil head during each tank refill. The wicking material should be white. If it darkens or gets black, the replacement is necessary. 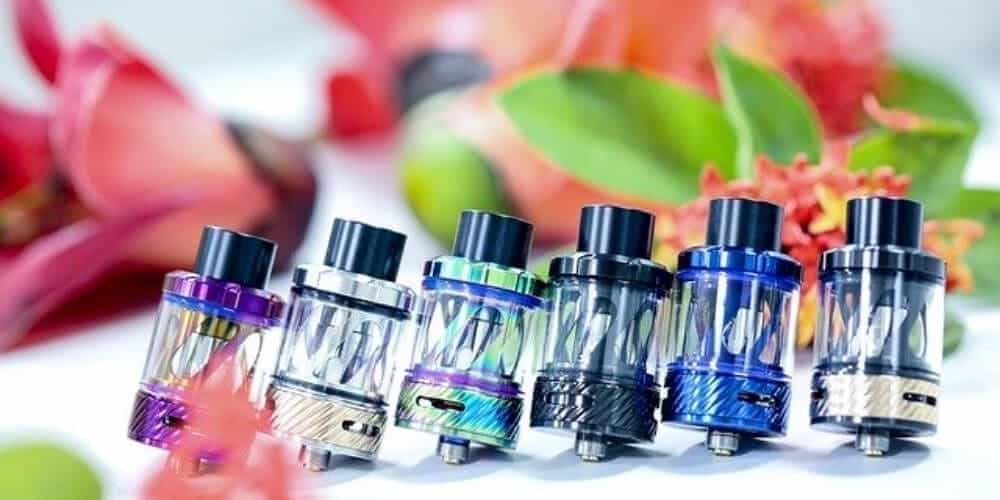 Many vapers even enjoy rebuilding coils as manufacturers have made it pleasantly easy to do. Coil makers succeeded in giving the customer control over wire, wick, resistance, and build.

Moreover, those who don’t know what to start with will benefit from thousands of YouTube tutorials offering all kinds of information about the different levels of difficulty.

Primarily, it is the same level of skills that needed for working with rebuildable tank atomizers and millions of users do that daily.

However, if you still don’t want to rebuild coils yourself, there is a vast offer of replacement heads on the market.

Sub-ohm tanks are for ones who want to be free from building new coils and dripping, as the RTA use requires. With sub-ohms you only have to prime a coil head, install it, fill the tank and increase the wattage in steps.

In case you are searching for your own best flavor sub ohm tank, we shall be glad to brief you on the possible choices in our review of the best sub ohm tanks for flavor.