As long as you are quality-focused, you never stop enhancing your tools and practices in the pursuit of vaping excellence. If you have decided to give a try on RTAs in this search, but feel lost in the informational dust, you get online, and we’ll gladly brief you on the build, qualities, and benefits of the best RTAs.

The Innokin Ares 2 D24 MTL RTA has a diameter of 24mm and holds 4ml of e-liquid. The unique Ares chamber provides you the rich, intense flavor and a strong throat hit, ideal for MTL vapers.

From The Vaping Bogan & Dovpo comes the eagerly-awaited Blotto Single Coil RTA! Those who are familiar with the previous dual coil Blotto will know many users tried to make their dual coil Blotto into a single coil – well look no further because Dovpo and The Bogan have listened to us and have specially designed a Blotto for single coil users. Featuring a 5mL eLiquid capacity, single coil configuration, and a 272° deck based airflow system.

Constructed from durable stainless steel, the rebuildable tank atomizer offers a strong and durable chassis. Accommodating a single coil, the deck is suuuper easy to build on! In addition, the dual slotted exterior airflow control rings ventilate the installed coil from 272° degrees around the coil to produce delicious flavor and vapor.

The Hellvape Fat Rabbit RTA is a rebuildable atomizer featuring a 5.5ml vape juice capacity and a postless deck offering plenty of space to build either single or dual coils. The dual honeycomb airflow intake produces increased vapor and intense flavor. The 810 drip tip is also built with a unique design to prevent condensation.

From mastermind vape architect Justin Lai comes the OXVA Arbiter RTA, a leakproof rebuildable atomizer that offers unparalleled flavor and ease of use. The Arbiter is built with a U-shaped build deck and can support both single and dual coil builds.

It is compatible with both 510 and 810 drip tips and comes with a 6ml bubble glass chamber as well as a 4ml straight glass chamber. The kit also includes two fused Clapton coils and shoelace cotton to begin use.

Suck My Mod and Wismec present the Theorem RTA Kit. The Theorem RTA features the introduction of the NotchCoil which is a new design by JayBo that promised improved wicking of your cotton as well as more naturally consistent heating element than you could achieve by building coils yourself.

More RTAs are in our Catalog

We shall also focus on what makes them different from other devices and give you the tips and tricks for keeping your tools right.

RTAs are for those who are looking for high-level performance, enhanced convenience, and improved control for a vaporizer. There is a similarity between an RTA (rebuildable tank atomizer) and a sub-ohm tank with an RBA deck, but the latter doesn’t offer that much flexibility. 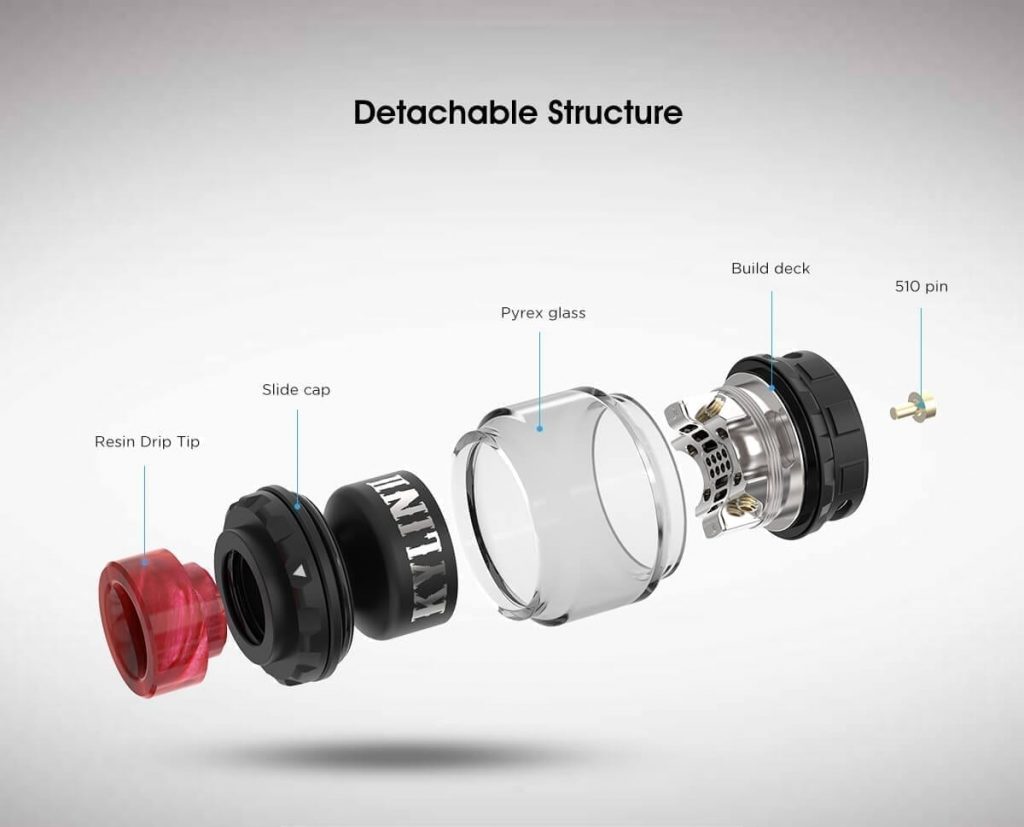 The RTAs will bring your vaping experience forward by granting an infinite variety of build decks, coil configurations, wicks, and vape tanks.

By now, manufactures engineered three types of rebuildable atomizers: rebuildable tank atomizers (RTAs), rebuildable dripping atomizers (RDAs), and Genesis atomizers. They built the fourth type as well, and it comes with a name RDTA or Rebuildable Dripping Tank Atomizer, but due to the similarity with RTA, we decided to merge the descriptions for the two latter groups.

The three types of feature coils that offer a possibility of modification. The user has to wrap a wire around a rod, that’s about 24 mm in diameter and then build a wick for e-liquid transportation.

Today vapers benefit from a vast choice of wrapping wires. One of the types of Kanthal A1 goes well with variable wattage mods and is of service with different vaping mods, thanks to the stable resistance to heating. All of the rest require temperature control mode, due to the varying resistance. 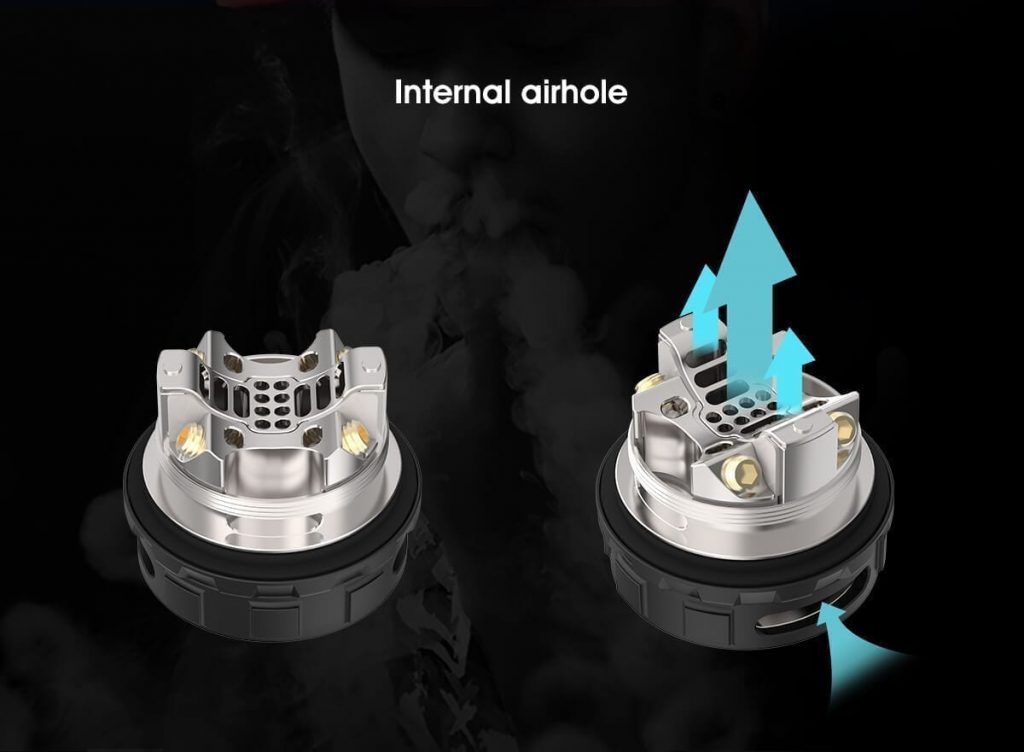 It refers to ni200 and titanium (ti grade 1) wires. VW and TC modes sustain stainless steel because this material produces variable resistance during the heating.

Rebuildable atomizers favor the use of various wicking materials. The materials that come into use in RTAs and RDAs most often are cotton and rayon. One used for Genesis is stainless steel, specifically steel mesh rolled into a tube.

Let’s explore what’s inside the RTA and how it differs from other atomizers. A user assembles each unit on their self, putting the coils at the bottom of the building deck and an e-liquid tank above the deck. A usual RTA vape tank may contain averagely from 2 to 10 ml of juice. A chimney surrounds the deck and air travels through the deck from the bottom through the chimney to the drip tip.

In case a device employs the side airflow, it is called an RDRA. In the newer RTAs, the airflow travels down from the top through the outside of the chimney stem to the coils and returns to the drip tip. Every RTA has holes in the deck to let the e-liquid flow through the wicking material. 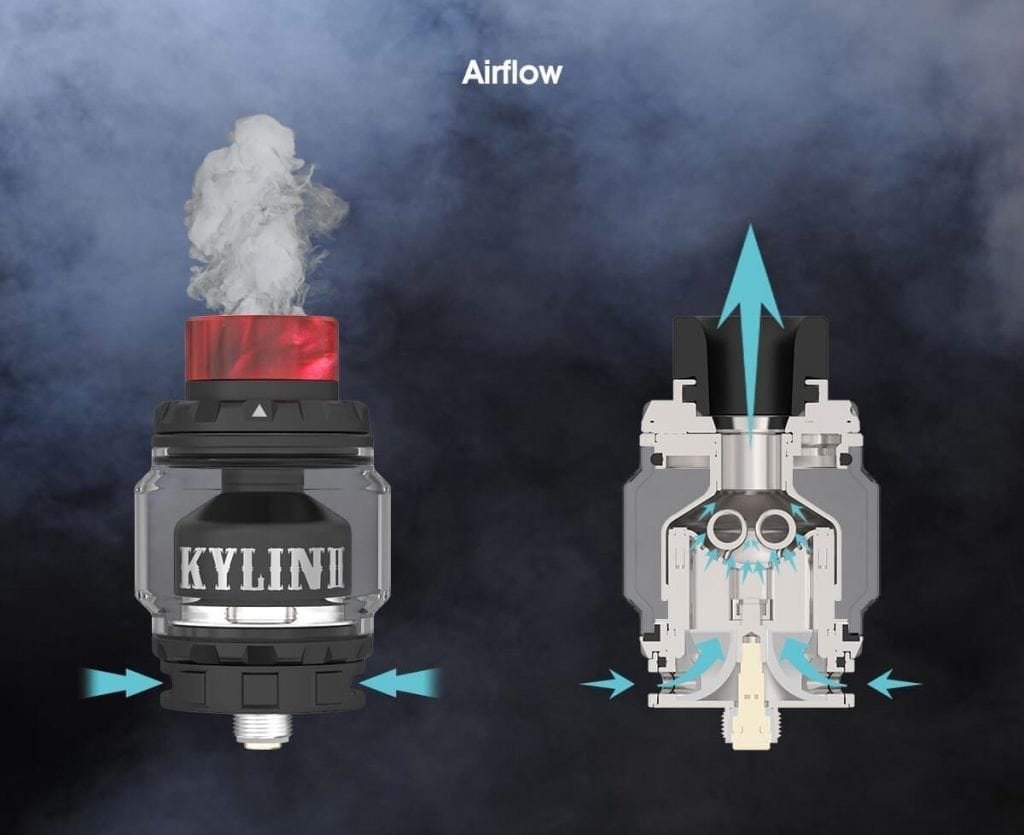 Among RTAs, we differentiate single and dual coil types, each of them features its benefits. Using the dual-coil RTAs you have more vapor and ability to run a vape at high wattages, so this type is perfect for cloud chasers.

The best single coil RTA will ensure the best quality of mouth-to-lungs vaping, providing the ability to taste e-juice even at low wattages. So the main advantage of this type is the economical use of power and juice while enjoying the most exquisite flavor and taste.

An RDA has a range of differences in comparison with an RTA. Firstly, a small well at the bottom of the device serves to hold the liquid. The wick connects with the well to let the coils absorb the juice. There is no need for chimney since the fluid is below the coils.

They have a top cap instead that covers a top of the building deck. The airflow starts on the top, sides, or bottom and streams through the top cap to the drip tip.

Now, let’s have a look at the Genesis atomizer that absorbs features of an RDA and an RTA. From RTA it inherits a tank, but unlike the predecessor, it occupies the bottom of the atomizer and sits below the build deck. The location of the shell resembles that of RTA and makes it similar to a spacy RDA well.

The coil absorbs e-liquid through rolled stainless steel mesh tubes. The build of Genesis includes a top cap precisely like with an RDA. It also follows the airflow of the latter: air travels to the drip tip from the top lid.

The evolution of vapes went on, and although the Genesis itself is a mix, there are now Genesis-based hybrids. Such devices have a bottom tank and an upper build deck but use cotton wicks, a feature inherited from RTAs. Vapes that mix design and qualities of different style tools are also called RDTAs.

RTAs outperform sub-ohm tanks, RDAs, and Genesis atomizers. Sub-ohm tanks do not require buying factory coils heads, which is an advantage for many vapers. Then, wrapping coils, buyers benefit from low prices. They can get a bunch of wire at the cost of two factory-made coil heads. Another advantage is that cable lasts a few months or a year and a user is least likely to run out of coils.

Likewise, the box of cotton or rayon will provide you with wicking materials for years, offering another source of financial benefit. The RDA user mustn’t depend on the supply of factory coils, like a sub-ohm. It is quite a solid pro, as, according to the FDA regulations, factory coils heads for sub-ohm vapes may get out of the sale in a couple of years in the US. 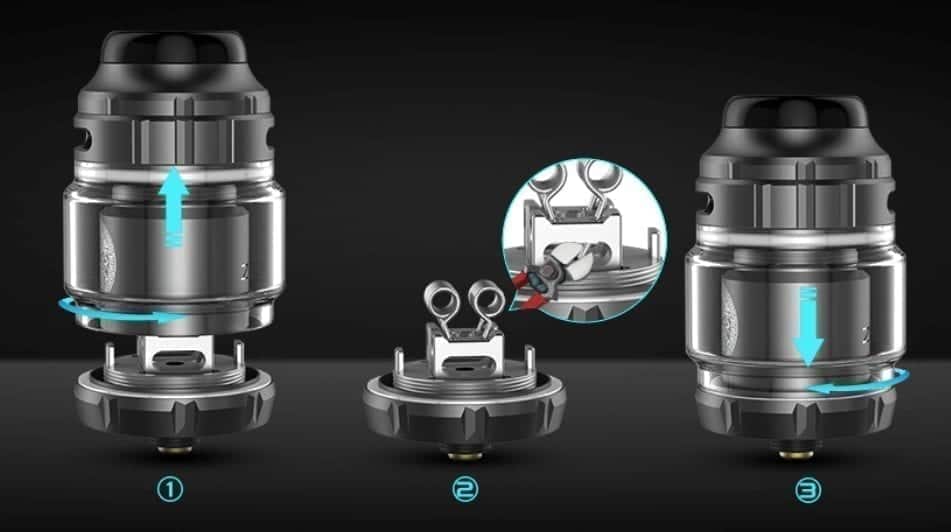 If we compare RDAs and RTAs, the latter group is ahead of the curve in two categories. They showcase more significant liquid capacity and set you free from carrying liquid bottles everywhere you go. The RTA tank capacity lets you enjoy vaping all day long and not bother about refilling.

Another positive trait is that our champion is leak-proof, even when held in a horizontal position, unlike the RDAs that don’t use a chimney and send liquid sideways or inverted.

As for Genesis atomizers, RTAs exceed them as well, as they are more accessible to coil and wick as the Genesis hybrids. Gennys isn’t leak-proof like RTAs, and to use them a vaper must oxidize a steel mesh and work out hot spots of its contact with coils.

And, finally, modern RTAs favor re-wicking, as they grant free access to the build deck. For this reason, they win fans among newbies as well as seasoned builders.
Users swear by the quality of flavor produced by RTAs. The modern market has a majority of variants, but consumers should look for their own best RTA for flavor, as it is hard to fit every taste.

Later we shall provide a digest of the best rebuildable tank atomizers to ease the choice. We shall also define what the best RTA tanks and coils are, to grant you the opportunity of choosing your future favorite product from the refined pickup.

If you want your RTA to surpass other vapes in longevity and usability, you have to stick to a couple of tips and tricks.

– For the best quality of vaporization, the coils should be in the air slots, mainly if your atomizer employs bottom airflow.
– Take care of the coil length. If it is too short, the wicks send e-liquid to the air holes, causing flooding. To avoid it, you also have to make sure the wicks absorb all the liquid and leave no drop behind.
– Too much of liquid brings your vaping experience down as well. It leads to dry hit; as extra-liquid blocks the deck. Balance is the most important thing when it comes to filling the tanks.
– Avoid overfilling and make sure you always have an air bubble to let your juice freely flow to wicks and support the air and vapor exchange.

We hope this review is helpful and the vaping newbies will be satisfied once they take a chance on their first RTA vape and enjoy all of its benefits.