Even though the e-cigarette industry is an incredibly lucrative one, there’s a lot we really don’t know about vaping. But because there’s some evidence to suggest it’s marginally better for you than smoking tobacco, many people will do it in places where they would probably never smoke cigarettes, even though it may potentially put others’health at risk.

According to a study published Monday in the journal Pediatrics, only about one-quarter of parents who smoke e-cigarettes or tobacco have rules against vaping inside your home, even though 73 percent of parents who smoked cigarettes did have rules prohibiting tobacco use in the house. If the results of the study are any indication, clearly some people who use e-cigarettes believe that the byproducts of vaping are not harmful.

“Parents are doing this to their children without understanding what the effects are and what the science shows already for these products,” lead author Jonathan Winickoff, the director of pediatric research at the Tobacco Research and Treatment Center at Massachusetts General Hospital, told Today.

But whether you’re a parent or not, you have to know that there’s some evidence that second-hand exposure to the chemicals emitted by e-cigarettes can be harmful. That’s because e-cigarettes don’t actually emit vapor, but aerosols, which contain tiny particles of harmful chemicals like nicotine, lead and carcinogenic chemicals, based on the Centers for Disease Control (CDC).

Exposure to such particles can exacerbate the symptoms of conditions like asthma and is partially why many municipalities and states have instituted laws banning vaping indoors. Way back in December 2016, the Surgeon General called vapes “a major health concern,” noting that second-hand aerosols could potentially pose a health risk.

Over the past five years or so, the popularity of brands like JUUL has grown exponentially, with one report indicating that the market may be worth $6 billion in the United States alone. This is notwithstanding the fact the FDA has issued numerous statements referring to e-cigarette use among teenagers as an “epidemic,” and has had to explicitly crack down on manufacturers marketing e-cigarettes to young people.

Although many e-cigarettes have been marketed as potential tobacco use cessation tools, there is not much substantial evidence that using e-cigarettes can help you stop smoking. Additionally, some e-cigarettes have been found to contain potentially hazardous chemicals like formaldehyde and diacetyl, a substance that is used as a flavoring additive, which when ingested has been linked to a condition known as “popcorn lung.” (Juul has stated that their product does not contain either.) 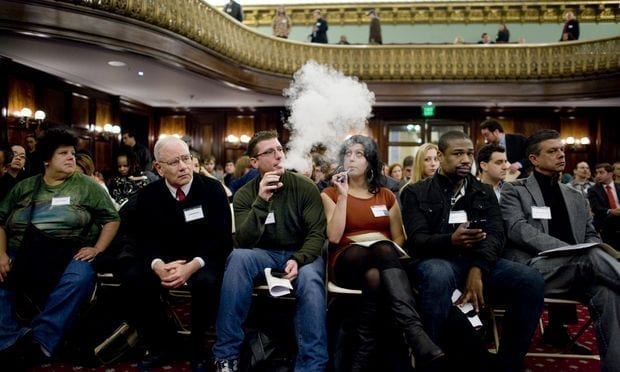 In fact, there’s some evidence suggesting that vaping could yield detrimental health effects even if you’re not the one doing it firsthand. A small 2014 study found that vaping indoors decreases the caliber of indoor air, increasing the concentration of nicotine, aluminum, and particulate matter.

So if you wish to vape, vape away — just bear in mind that it might be wise to ask for your friends’permission before you do so in their homes. That’s especially if they have a kid, in which case you probably don’t want to JUUL directly in the child’s face (throwing Kraft singles at them, however, is perfectly acceptable).