If there’s one device in the Wismec series that boasts impressive power, it definitely is Reuleaux RX300. The vape mod incorporates four 18650 batteries ensuring the maximum output of 300W, which is not something every vaping device can offer.

But there’s more to this model than you might think. In this Reuleaux RX300 review, we’ll take a closer look at this device and see what else makes it so popular among users. Keep reading!

The mod has 58mm in width, 81 mm in height, and 24mm thick. Inside the device, there is a powerful chipset that allows for such power output and lots of other useful features: variable wattage mode, full temperature control, RX300 firmware updates, etc. 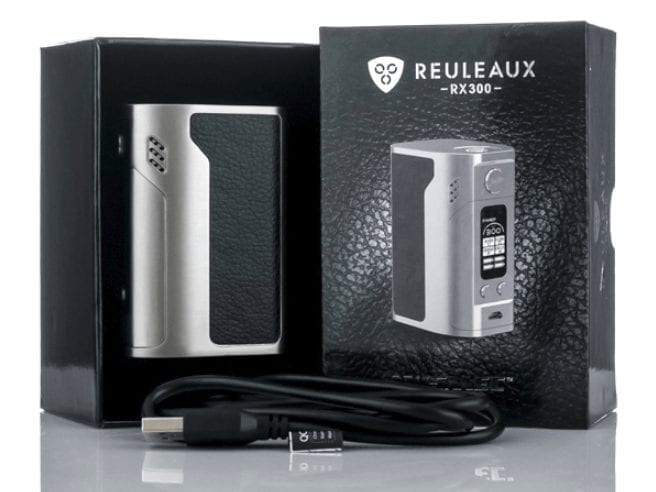 The vape box mod was designed by JayBo and the team, so they are the people responsible for its amazing appearance and an excellent build quality. They are also the reason why there are lots of similarities between Wismec RX300 and the previous models.

This particular device has a very similar interface panel as many other Reuleaux vapes. There’s an OLED display with the fire button and adjustment buttons, as well as the USB port.

Even color arrangements seem to be borrowed from the previous models. That being said, Wismec RX 300 has customizable stickers, meaning that the user can have more opportunities for design.

It is true that stickers on vape mods don’t usually add charm to them. In most cases, they only make a vape look cheaper. However, this is not the case with RX300 vape. The stickers can really make the device stand out because, like any other thing made by Wismec, they have a great quality.

On the whole, this model totally wins over the previous ones in terms of design and a color gamut (you can choose between silver and black colors).

RX300 mod body is made from an aluminum alloy, and the device’s regulatory and fire buttons are made of stainless steel. Besides, the magnetic battery cover on the vape mod is very much similar to the previous models but in the Reuleaux RX300, it’s a bit larger (so that it could cover 4 batteries). 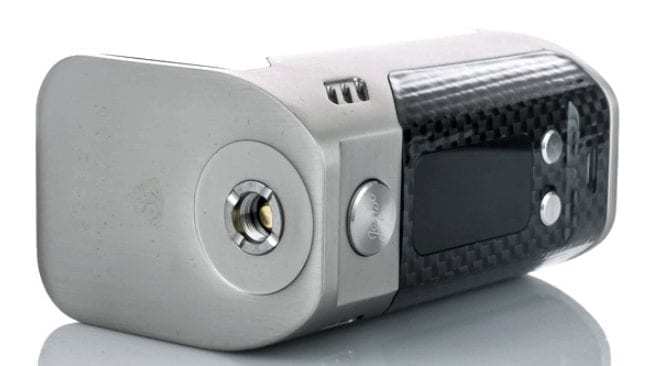 In addition, the mod features the 0.96-inch OLED screen. This size is just right to display and arrange all the information that might be necessary for the user.

It’s very easy to use this device, especially if you had owned a Reuleaux before. The user menus are pretty straightforward, all the information is displayed vertically. The device turns on and off by five clicks on the fire button. The other features are activated in the following ways:

– To activate stealth mode, press and hold the fire button and the left button simultaneously;
– To switch between lock/unlock, hold down the left and the right keys;
– To enable the preheat function, long press the power and the right button.

The USB can be used for both charging and installing Reuleaux RX300 updates. As to the device’s safety, you shouldn’t worry as RX300 is equipped with lots of corresponding features, including temperature protection, low-battery warning, 10-sec cut-off, etc.

The 300W power output of Wismes makes this device a perfect option for a very specific kind of vaper – the one who likes to create massive clouds. What makes RX300 truly special is its extremely responsive chipset and an outstanding temperature control.

Unlike many other devices that promise too much, Wismec RX300 actually lives up to the expectations. Just choose the most suitable mode and navigate different options easily.

The RX300 vapor quality is delightful. It doesn’t matter what coil you use because you’ll receive thick and warm clouds anyway (but of course the experience will be so much more impressive if you go for the sub-ohm coils).

Also, make sure that the tank that you use offers excellent airflow because this is a very important factor for the devices with a high wattage.

Overall: Our Opinion on the RX300

It goes without saying that the Reuleaux RX300 is an original first-class mod. However, it might not be the best option for vaping beginners or any person who doesn’t like devices with an extra weight. If RX300 seems too fancy and doesn’t click with you, don’t worry. The market is full of simpler alternatives.

If you are experienced vaper, the functions you get after Wismec RX300 update will definitely satisfy all your vaping needs and enable you to fully customize your experience. Besides, you can use the RX300 to recharge your tablet or smartphone! How awesome is that? Just make sure you have an operational RC adapter.

For those searching for a premium quality mod crammed with useful features, Wismec RX300 is the best choice for you. Plus, we’re more than sure that Reuleaux RX300 price will be a pleasant surprise for you too.