Popcorn Lung and its link to vaping

Bronchiolitis Obliterans, also known as Popcorn Lung, is a non-reversible disease, during which tiny air sacs in the lungs become scarring and narrow. One of the causes is diacetyl, a chemical, used in 39 out of the 51 flavoring fluids for vaping. So should vapers get worried? Let’s find out.

Why is it called Popcorn Lung

In the year 2004, the US Centers for Disease Control and Prevention (CDC), reported several cases of Bronchiolitis Obliterans. They were discovered between 1992 and 2000 among workers of Gilster-Mary Lee Corp., a microwave popcorn factory, based in Missouri.

The National Institute of Occupational Safety and Health (NIOSH) did further investigation and found out that the cause was diacetyl. It is a buttery-flavored chemical, used in foods like caramel, dairy… Or popcorn. Eventually, it has a couple of outcomes:

1. The company had to go through an awful lot of lawsuits. In particular, it was obliged to pay $20 million to Eric Peoples, one of the workers, whose lungs were injured.

3. Due to the association with popcorn factory, Bronchiolitis Obliterans got its slang name, Popcorn Lung.

Speaking about diacetyl, firstly we have to mention diketone. It is a molecule, containing two ketone groups. Diacetyl or 2,3-butanedione is the simplest diketone. Its formula is (CH3CO)2.

In concentrated form diacetyl is a yellow/green liquid and has a rich buttery flavor. So, it is widely used in processed food to give it a creamy flavor. Diacetyl can be found in a broad range of foods, such as honey, coffee, vinegar, butter, beans, apples, artichokes.

But do not hurry to exclude all these products from your daily menu! Several diketones, which are used as flavoring agents, are considered as safe to ingest. The exception is the genotoxic acetylacetone.

However, diacetyl is much less safe to inhale. The chemical can cause lung illnesses, such as Popcorn Lung, when it is heated under high pressure. Just like in the case of Gilster-Mary Lee Corp., where workers heated diacetyl up in microwaves.

What is Popcorn Lung? 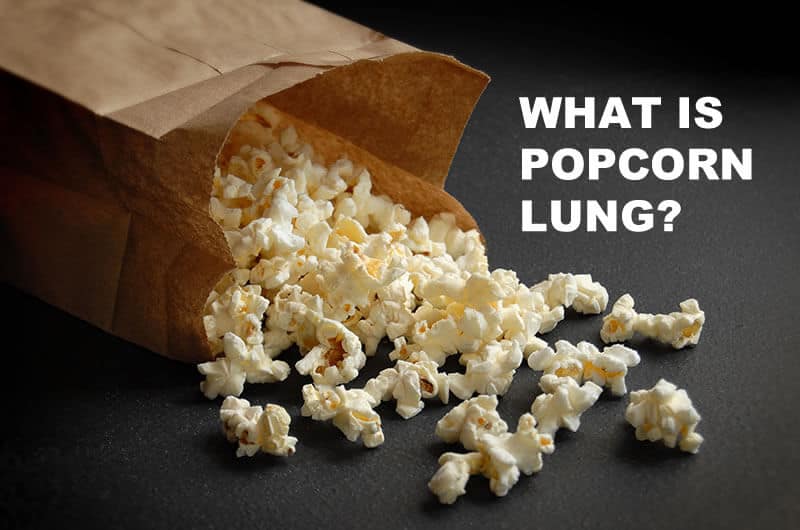 Signs of Popcorn Lung are often subtle and easy to overlook. They include wheezing, dry cough, shortness of breath, rapid breathing, and fatigue. It is also important to know that Popcorn Lung is often confused with other diseases, such as asthma or Chronic Obstructive Pulmonary Disease (COPD).

As it is fairly easy to mistake Popcorn Lung with COPD, it is better to know a little more about these diseases. COPD is a chronic inflammatory lung disease, which results in troubled airflow from the lungs. It affects the bronchial tubes and air sacs (alveoli), which are very important, as they force air out of our bodies. COPD makes the bronchial tubes and air sacks less elastic, also they over-expand.

As a result, some air is left in your lungs when you exhale and some part of carbon dioxide, which has to be exhaled, does not leave the body. Among symptoms of COPD are wheezing, persistent cough, feeling that you are short of breath.

Now let’s discuss Popcorn Lung. It is also an inflammatory lung disease, during which lung tissues and airways become scarred and more narrow. The result is severe shortness of breath, dry cough, wheezing. The symptoms are quite similar to COPD and the only way to diagnose both of these diseases is a procedure, called lung biopsy. It is an interventional procedure, which involves opening the chest of the patient.

After it, the doctor removes some sample of cells from the lung and examine it under a microscope to define pathology. Needless to say, the procedure is complicated, expensive and its benefits are vague as the treatment for Bronchiolitis Obliterans and COPD is essentially the same. So there is no good reason for opening your chest like that. 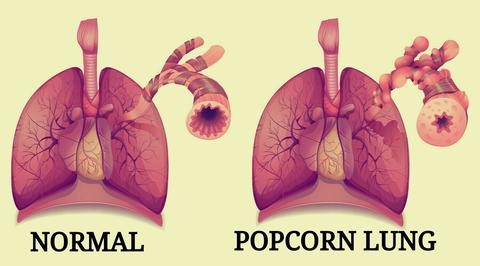 Does smoking cause Popcorn Lung? It is a legitimate question, especially if you are a smoker, but not a simple one. Yes, cigarettes do contain diacetyl. And the amounts are big, much bigger than, for example, in a vape liquid. In fact, people, who smoke cigarettes, inhale 100x more diacetyl. Not to mention that cigarettes also contain acetoin, one of the additives to cigarettes.

Also, in 2006 was published a study “Determination of toxic carbonyl compounds in cigarette smoke”. Kazutoshi Fujioka and Takayuki Shibamoto, authors of the study, claimed that one cigarette contains more than 400 micrograms of diacetyl. It is an equivalent of 30 cartridges of e-liquid.

But, till now, none of the smokers was diagnosed with Popcorn Lungs! Except for smokers, who also worked on popcorn manufactory and inhaled diacetyl. So, it is safe to assume that the connection between smoke and Popcorn Lungs is not solid enough. Well, at least now.

In 2015 researchers at the Harvard T.H. Chan School of Public Health carried out a study. They discovered diacetyl in more than 75% of flavored electronic vapor cigarettes and refill liquids, which were tested. To be more precise, diacetyl was found in such flavors as Cotton Candy, Fruit Squirts, and Cupcake, targeting young smokers. The study was also published in Environmental Health Perspectives on December 8, 2015.

It also concluded that most of the brands that contained diacetyl contained the toxic chemicals acetoin and 2,3 pentanedione. Now many e-liquid companies decided to stop using diacetyl in their products. However, some of the manufacturers still use this chemical, so their products contain a small amount of it.

First of all, what is a batch testing? The main goal of it is to detect potentially risky chemicals in different batches of e-liquid bottles. Among others, these chemicals include diacetyl, acetyl, and nicotine. Such testing is performed by accredited laboratories that adhere to high-quality standards, but batch testing still has some drawbacks.

First of all, it is expensive. Secondly, original testing regimes for e-liquids have very high limits of detection. It means that some chemicals in small quantities can be missed. Moreover, diacetyl simply does not have any standards. Till now, we have no idea, what amount of it is safe, and what amount is not.

But, if you are still worried about diacetyl in your e-liquid, we have some good news. It is not that hard to detect, which e-liquids are diacetyl-free and which are not. Just do your research and visit a couple of websites of manufacturers of e-juice. They often public the results of batch-testing, so it will not be hard for you to compare.

To vape or not to vape?

So far the question does vape cause Popcorn Lung, or not, remains open. However, despite the researchers we have mentioned before, a lot of reputable figures and institutions consider vaping as a safer alternative to ordinary cigarettes.

To provide an example, The Royal College of Physicians and Public Health England have considered all of the hazards of e-cigarettes (including Popcorn Lung). Both have concluded that vaping still is safer and healthier than cigarettes. Moreover, they even recommend doctors to tell their smoking patients about e-cigarettes and recommend using them instead of regular ones.

To sum up, e-cigarettes do not have more diacetyl, than normal cigarettes. Moreover, the concentration of diacetyl in e-liquids is so tiny, that it can`t be possibly linked to Popcorn Lung.

On the other hand, vaping is far healthier than tobacco cigarettes (according to Public Health England). It seems like now we have two options:

1. Minimize using of diacetyl in e-liquids.
2. Conduct some thorough researchers to find out more about diacetyl and vaping. Also, create a standard to measure a harmful chemical in e-juices.

Till now vaping is still a healthier option. So weight all the options and make your decision.