The device we offer today is clearly out of the ordinary, and this refers to everything: the material it is built with, the way it switches on, the batteries, the construction and of course the design.

If you are a good-time-charlie realizing that LED-enlightened metallic devices populate clubs and parties, but you are desperately looking for a way to stand out, then Magic Flight Launch Box is definitely for you.

The awe-inspiring vape is combined with flawless production, which makes it notable on the market of dry herb vaporizers. The price of $119 isn’t high as well.

Buying a Magic Launch Box, you get a whole bunch of stuff, including the device itself, two AA batteries with a vape charger, a conductive user manual, a glass tube to inhale through, a battery info card, and some rubber protectors for cells. The whole set comes in a stylish and comfortable tin box, which is also a perfect solution for traveling.

Some Technical Specs and Facts about MFLB

The Magic Flight Box is built from a solid piece of wood and is quite livable in operation. The body of the device is a square box, which is not exactly ergonomic, but comfortably sits in your palm. The glass window, also functioning as a lid for a dry-herb chamber, shows you the contents tank. To switch the device on you have to plug the battery into the opening on the box-side, and push it like a button.

Yeah, you got me right – the battery is also the button. To cushion your finger, when pressing, put a rubber cap, supplied in the kit, on the free battery top. As you push the battery, a small LED light in the bottom of the glass container goes on, signalizing the start of work.

The nifty glass window adds a highlight to an MFLB vaporizer, but it is almost useless when it comes to heating the herbs. The vapor fills all the container, thus hiding the view of the remaining material. Still, if you shake the device, the stuffing reveals itself.

The glass tube for vapor inhaling also comes as a plug-in part, which is not the best possible solution but works fine as you vape in a sipping style. Since the battery and the glass tube are detachable components which move forward to getting somewhat loose in the long run, the whole device doesn’t give you a strong-arm feeling.

The MFLB vape herb chamber volume is not that spacious, but it will contain a chunk of your flowers. It’s enough not to send you refilling the tank over and over. Even if this does happen, the refill itself is quite straightforward. What you have to do is to push the glass lid aside and change the contents. The wide loose-fitting opening makes the whole process fast and comfortable. The herb scent unfolds itself best when you grind the material small.

The particles on the container sides may slightly burn, due to the direct contact with heat, when used long. The whole Magic Flight Box unit is quite durable, except for the screen. As for the latter, make sure not to drop or tamper the device, and MFLB vape will serve you many months if not longer.

Let’s sum up the setup. You unpack the Magic Flight vaporizer, fill the container with the ground herbs, plug the battery and the glass tube in the respective openings and press the battery. You are all set! The whole process is so natural that even a five-year-old child can handle it (doesn’t mean they should, though).

If most of the e-cigs and vaporizers compete in the freshness of their charging devices, the Magic Box goes old-school. Instead of the widespread today 18650 batteries, they use AA batteries, included in the package. To get the machine running you need only one battery, so you can put another one in the pocket when going out. The cells are disposable and rechargeable at the same time, and a huge plus is they are widely available, at least until they become some objects d’art in the market populated by micro-cells and USBs. 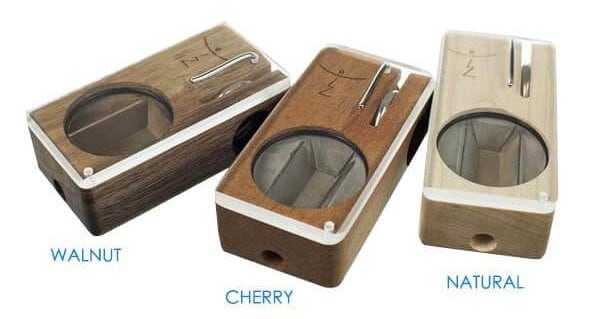 It is a stand-out feature of Magic Flight vaporizer, so it deserves a separate discussion. First of all, wooden vaporizers are a rarity, but taking into consideration flavor production, battery style, and positive tech traits, we receive a unicorn.
“Simplicity is genius” is the first thought coming when looking at MFLB vaporizer.

It is, in fact, a straightforward and retro device which looks like anything but a vaporizer. So here is its curse and blessing. On the one hand, it’s a feast for the eyes for the vaping savvies, on the other hand, it may feel weird for a newbie.

The first samples were issued in maple wood, but by now the company extended the array with the Cherry and Walnut versions, which come, respectively, at $139 and $149.

Let’s mention that despite an unusual and somewhat rough housing, the whole Magic Flight Box is elegant and it is manifested in everything: from a well-balanced size to natural coloring (plain wood and glass).

When unpacking and setting, you just can’t help but feel like you’re about to play your first game with a brand-new shiny toy packed in the same tin box.

The flavor quality depends much on the frequency and strength of draws and requires some command. The smell and taste are influenced by how small the herb particles are (the tinier, the better), how often you take draws are and if you mix herbs in the tank when vaping. Here we give you some tips to avoid comedowns:

– Moderate long and slow draws provide the best quality of taste and vapor.
– Extremely slow draws give a burnt taste especially if the material is not mixed.
– Quickdraws let you avoid burned taste, but there will be little vapor.
– Small quickdraws will also allow vapor fill the chamber and provide the excellent taste.

A sneak-peek: the quality of taste and vapor is much better when the container is not trenched with herbs, and there is enough room for them to mix up. Use a brush end to move the herbs in between sessions, or do it by shaking the device with the lid tightly closed.

To help you decide on taking the Magic Flight Box or not, we would like to stress the following points:

– Perfect price among the devices of the same class.
– Simple to assemble and use.
– Ready to vape in between 10 seconds after the battery is plugged. It is fast, as other devices of this kind will take 1-2 minutes to get ready.
– Spacy enough to contain herbs for a couple of sessions and easy to refill when the material is out.

– Gives a burnt taste when used without proper skills and it takes time until you adjust.
– Doesn’t have a temperature control system.
– The lid can break as the device falls.
– It doesn’t preserve all the taste of the herbs like other vaporizers do, so it’s not recommended using it with high-quality herbs.

To sum up, we’ll say that the magic flight box is simple but not vain and that’s what makes it so unique. It comes at an affordable price, is quite portable as compared to other herbal vaporizers and is fast to set and hit. It’s not the leading-edge device with a bunch of modes and features, but it’s quite good for ones who sound quality with little effort.