There are many vape manufacturers out there, yet not all of them feature that the quality Vapor King offers. Today, we will be talking about their product line, which makes them so cool, and a little bit about the company’s mission and vision. Buckle-up as we uncover the secrets of Vapor Kings finest kits, touch on the industry in general, and talk about the company itself in this Vaporking review.

The company started as an e-cigarette manufacturer, and since then, they explored many other product ideas. Some of them were successful, others weren’t so great. That being said, the company grows anyway. Over the past years, they’ve expanded the assortment, started work on pretty good e-juices, and made a pretty solid name among vapers.

If there’s one thing sure, it’s that someone’s personal preferences mustn’t be argued. I myself don’t like cig-a-likes but it doesn’t mean you don’t. There are lots of devices out there, and for an average wallet, the Joytech starter kit is exactly what you need. It’s jam-packed with everything one might require, and the gadget itself just works great.

Another interesting duo would be the eGo and the Kanger kits. These devices have a nice reputation for being some of the most reliable on the market. There’s nothing bad that can be said about these devices, and no matter which one you choose, you will be satisfied. It was a wise decision for Vapor King to put these devices up-front. They are just too good to be ignored. If there’s anything the company should do, is that they have to keep them in stock.

Just keep one thing in mind: the amount of stores is staggering. You won’t have to google Vapor Kings locations as they are practically everywhere across the globe, and for those regions that don’t have a dedicated store, you can check the online ones.

As for to the kits, these aim to give vapers a full set of items to start vaping. Vapor King gets the job done and right out of the box, you can expect an electronic cigarette, a charger, and tons of supplementary items. Just as we mentioned previously, it’s all about options, and if you plan on getting a different kit from an entirely different company, keep an eye on what’s included.

The Company in a Nutshell

There’s an old saying that the seller is as good as one’s service. It doesn’t really matter what quality you offer if your service is horrible. I can say for a certain that Vapor King is doing a pretty good job in this regard. The company is trying its best to provide its customers with the best possible service. True, every company does that, but what sets Vapor King apart from the rest is that they never stop improving. They have a pretty robust website, a responsive support line, and pretty short delivery time. Seems like a perfect combination, but they didn’t stop there as they constantly try to satisfy their clients’ needs. Definitely no complaints here. 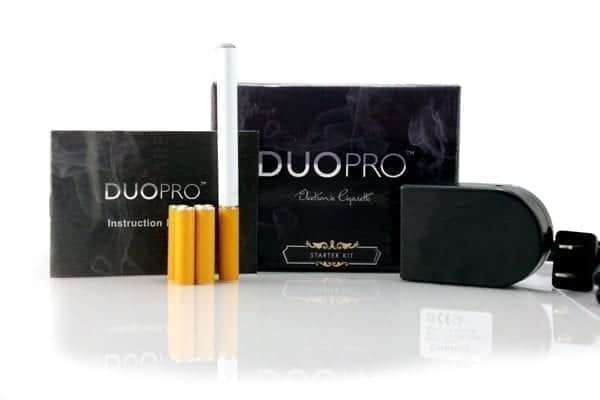 When it comes to cig-a-likes, Vapor King has perhaps the most interesting selection. The company is well known for pushing people to stop smoking and embrace vaping. Their latest product, the Duo Pro Starter Kit, is a nice package for anyone who would like to try out vaping. It comes with a pair of batteries, a pack of cartomizers, a USB charger, five cartomizers, and lastly, the user manual.

We won’t be digging into the batteries details as there is nothing special. The batteries last up to 300 puffs per cartridge, which is the lifespan that can be considered as good. The shape, on the other hand, is something different. Just like most e-cigs, the Duo Pro resembles a traditional cigarette to ensure a smooth onboarding for normal smokers. The device gets the job done as it easily satisfies curb cravings and frankly, has a nice feel to it. 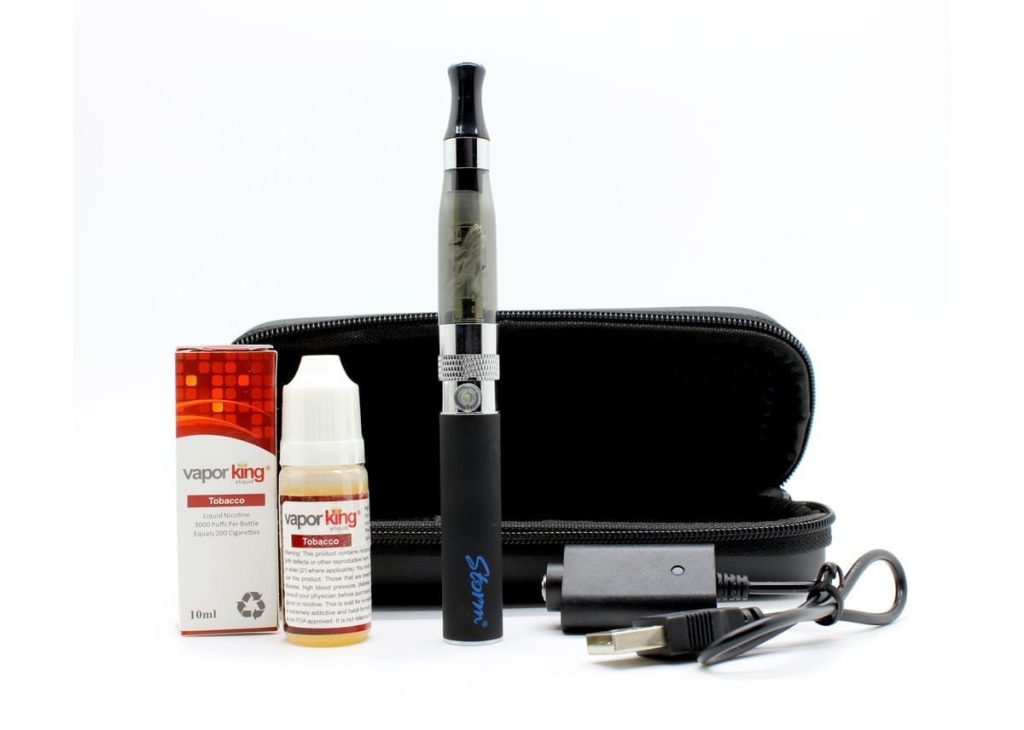 Being not so popular among Vaporking products, the Storm Express Clearomizer Kit is a substantial upgrade over the Duo Pro. The kit features a Storm branded clearomizer, a bottle of e-liquid, a home outlet, USB cable, and a nice carrying case. It’s the small things that matter, and the kit delivers exactly that. Right before you make an order, you get to choose from three different colors including steel, pink, black.

These cig-a-likes are bigger, taller, and wider, but rest assured as the Storm Express ones are still pocketable. The designers explain that the increased size was necessary to ensure a nice battery life. Also, the clearomizer was made to hold more e-liquid and it has a nice universal refill mechanism. Any e-liquid will work well with this device. 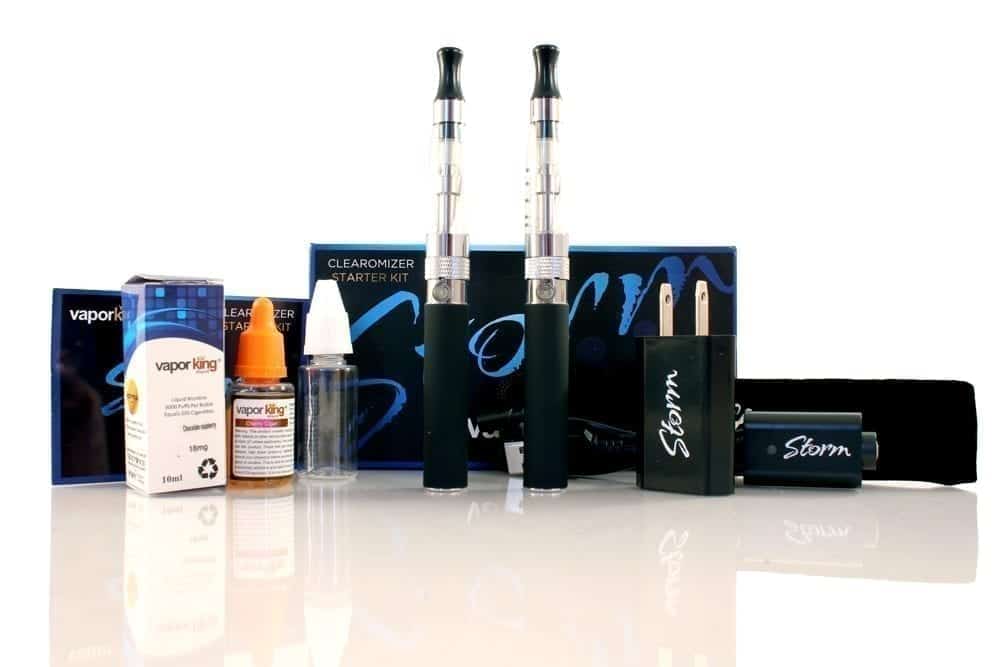 The Storm Delux Kit, as the name suggests, is a high-quality package made to satisfy any vaping needs you might have. Courtesy of King Vapor. The kit comes with a set of clearomizers, a fast charging USB cable, a carrying case, and the star of the show, a Premium Vapor King e-liquid. Unlike traditional kits, this one is special as it allows for a massive amount of customizability.

One major advantage the kit has over its competitors is that clearomizers are interchangeable. If your battery runs dry, you don’t need to dismantle everything as the tank can easily be swapped. Another cool feature is that the tank itself can be refilled, eliminating the need to dispose of it once it runs out of juice. Speaking of juice, we already mentioned that it comes with a top-of-the-line Vapor King e-liquid but what we forgot to say is that it will last you for a while due to the way the device itself works.

It might be expensive but it was designed to save you money in the long run. For starters, the atomizer head can be replaced, the power draw is minimal, and the amount of setting is staggering. This is a perfect product for both beginners and pros alike.

It is widely thought that a Vapor King electronic cigarette is all you need and that it can’t get any better than that, yet, we have a combination of Vapor King and Joyetech here. It’s best of both worlds – the E-Tank Starter Kit. It offers a replaceable atomizer, amazing vapor production, and a top-notch line build quality.

The package includes one 5-pack of cartridges, a home outlet, two high-intensity atomizers, a set of rechargeable batteries, a USB cable, and a manual. For starters, the batteries included in the package come in different colors, each of them serving a distinct purpose. You see, some of them are automatic and others are manual. Automatic ones allow you to draw vape without the need to press the button and vice versa. This might seem like a disadvantage but not as it ultimately means that you have options to choose from.

Once you installed the tank, the Vapor King vaporizer measures in about 4.5 inches. It isn’t exactly pocketable but it gets the job done as it packs quite the punch. To stand out of the bunch, the device has a three-piece design. This isn’t some odd choice made by the designers, it’s all about saving you some cash in the long run as the tank is refillable, the atomizer is replaceable, and the power draw is minimal. All in all, the device is great. It’s modular, has a nice design, and not that expensive. A great choice for people who want to learn advanced vaping. 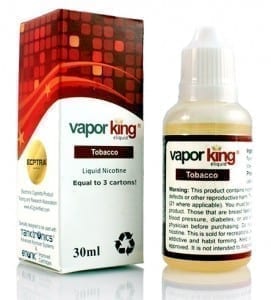 Doing a vapor king review without mentioning their liquids is like playing a video game without a controller. With this in mind, we would like to talk about different Vapor King e-liquids. Juices are available in 30ml and 10ml bottles and come with a nice selection of different flavors.

The majority of bottles have an 80/20 PG/VG ratio, which makes the taste so much more pronounced and the general price tag isn’t that high. As for nicotine levels, you have an option to choose from 0mg up to 36mg, although keep in mind that the latter is available only in selected flavors. If you are looking for something exotic, Vapor King doesn’t have those, but if all you need is a nice quality in standard flavor juices, Vapor King is the way to go. They are cheap, taste good, and you won’t be tired of them any time soon.

It’s All About Them Greens: Industry Prices

While many companies don’t sell stuff cheaply, they do lower the prices sometimes. Just sometimes. Essentially, today’s average price is pretty high, and companies try to do whatever they can to keep themselves afloat. Some offer loyalty programs, others give substantial discounts. But generally speaking, the price will always be a tad higher than you expect.

Yet, a high price doesn’t always apply for starter kits. These sell at a reasonable price most of the time but they practically never go on sale. Vapor King provides some of the most reasonable prices out there. Be sure to give their store a visit.

For beginners, Vapor King doesn’t have a lot in store but what they already have is pretty good and comes with a decent price tag. At the same time, advanced users will have a lot of fun here with different accessories, devices, tanks, atomizers that come with all sorts of price ranges.

All in all, as a one-stop vape shop, Vapor King is, well, king. They really have everything, and customer service just keeps getting better. They never stop, and in a couple of years, this will be the place to go for your vape needs.