When deciding to quit smoking, the first thing people think about is nicotine patches. The second question is, do nicotine patches work? They say yes, and the best way to prove that is to stick one over each eye so that you can’t find your cigarettes. If seriously, they do work, but like any other remedy with nicotine contents the patches are to be approached with care and some education.

Smoking is a coin of two sides: while giving you brief moments of emotional satisfaction, it causes both physical and mental addiction. While psychological dependence is something that requires the professional view, the need for nicotine can be gradually tamed.

Dropping tobacco from the first attempt is not an easy thing to do, and quitters end up playing a constant game of wins and losses in the endless effort to prove to themselves their power of will. It’s normal to fail giving up abruptly like with “cold turkey” method. The main point is not to quit trying and take up replacement approach.

Using patches, you get nicotine soaked into your blood through the skin, which is called the transdermal method and is a beneficial way of smoking replacement.

The stop smoking patches consist of nicotine pads and plastic. Thanks to the sticky element they get attached to the skin for a whole day and don’t come off even when rubbed accidentally with clothes or the like. The usual pad contains a portion of nicotine to last 24 hours, so it should be worn a day. They are entirely discrete, resembling bandage and don’t cause discomfort when worn. 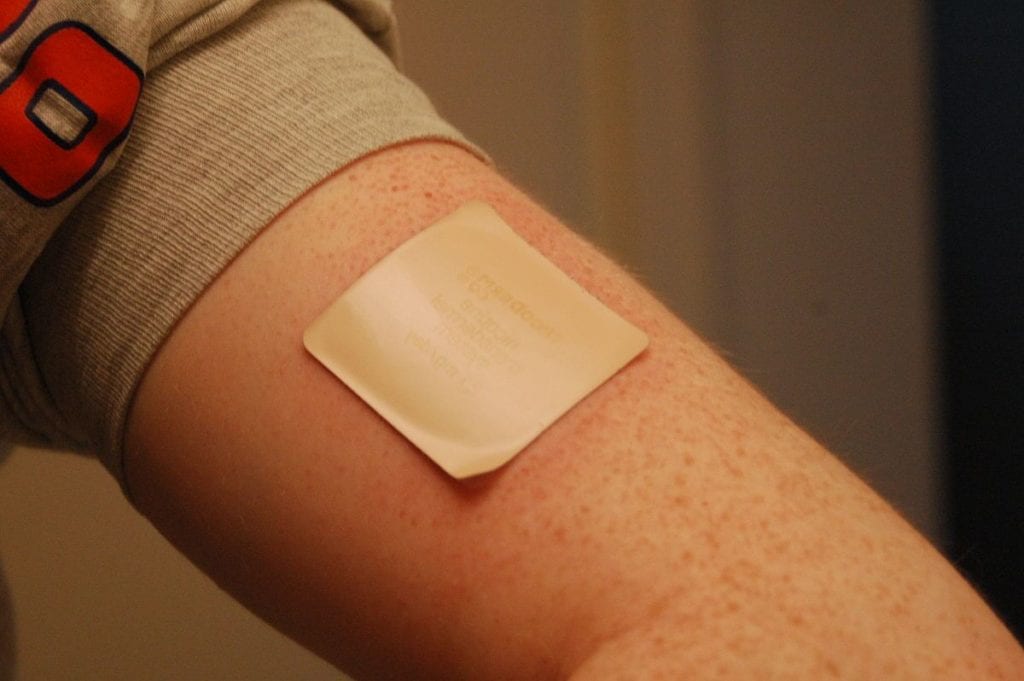 Like with tobacco smoking you can choose the nicotine level you take. Heavy smokers will need stronger patches and vice versa. The concentrations vary from 7 to 21 mg of nicotine. By gradually lowering the level of nicotine in pieces, you do away with addiction step by step. Your body will require less nicotine from day to day so that finally you free from it.

The history of the product started back in 1991 when the manufacturer GlaxoSmithKline has issued NicoDerm CQ transdermal system to the market. First, they were available only on doctor’s prescription, but since the method proved to be useful and harmless, the U.S. Food and Drug Administration has allowed the product to the market without a prescription in 1996.

The introduction of generic versions made the product much cheaper and therefore more affordable. The original brand version also has developed in the course of time. They improved the quality of plastic, that is stickier and less obtrusive now. It was made to match different skin tones, quite a handy feature if the wearer wants to stay discreet about the use of patches.

After the first hour of use, you may feel itching, burning or tingling, caused by the chemical reaction of nicotine absorption to your body. Some people may experience sleep disorders or vivid dreams, as well as headaches. It depends on the nicotine level as well as the individual reaction of the human body to high doses of nicotine.

Being designed as a remedy for nicotine addiction, the nicotine patches still contain the same drug, and therefore its consumption in high doses has the same effect as heavy smoking. That is nervous disorders like anxiety and insomnia, then skin irritation or itching, stomach ache or nausea. Some nicotine patch reviews report the elevated rate of heat beating.

Therefore quitters have to be particularly careful and switch to lover dose patches the very moment they notice any of the symptoms mentioned above.

Granted, the side effects may bring some discomfort, but the positive impact you get from patches outweighs any risks. Plus, even though this is not a new remedy, it’s the one that’s become traditional already. It’s undergone numerous clinical research with high success rates.

How Do Nicotine Patches Work?

Once proven as a helpful tool in fighting nicotine addiction, the patches have conquered other fields of the medical market. Doctors prescribe them for treating dementia, vertigo, or pains. They’ve been used to tame symptoms of ulcerative colitis. Some diseases, though, can be worsened by consumption of nicotine in any dose. Therefore, the attempts to self-medicate may end-up in adverse outcomes. Doctor’s advice is necessary both for exemplary and off-label purposes.

Nicotine may be helpful with mental disorders like depressions, anxiety, attention deficit, Alzheimer and Tourette syndromes. Still, the medical research is being provided to consider all the pros and cons. The substance has proven to help with mental activities and boosting concentration (regardless the way of consumption though, it’s equally useful in forms of cigarettes or transdermal patches). The risks for health, in particular, cancer odds, remain substantial and more medical attention is required.

The transdermal therapy proved to be sufficient for nicotine quitters. However, caution is needed in cases of side effects. Of course, these patches are to be kept out of a child’s reach. 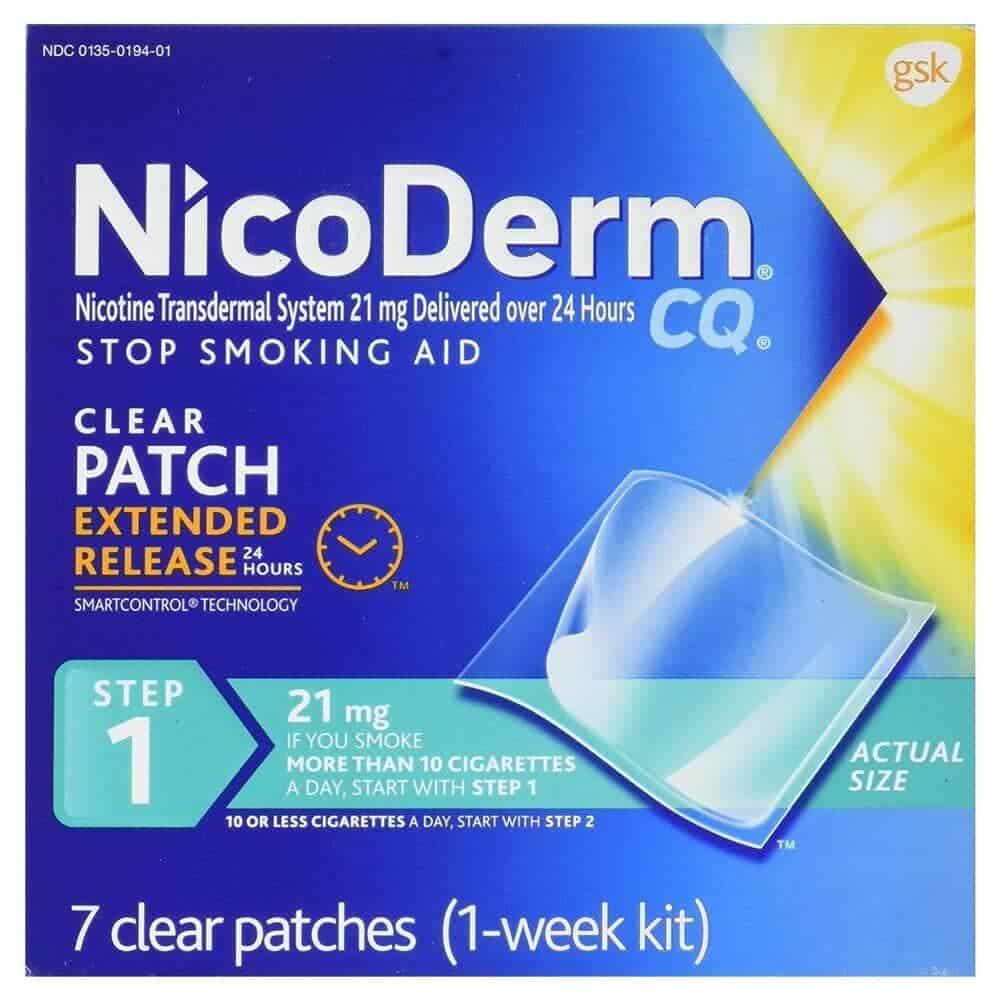 Quality comes first with GSK since they pioneered the industry of nicotine patches. Their product NicoDerm CQ remains the market leader for the last 20 years now, and it shows signs of leading the industry in future as well, as by far, there aren’t other transdermal nicotine sources of better quality.

The pros of NicoDerm patches are apparent. First of all, it’s very discreet and remains almost invisible when used. Secondly, it provides a steady flow of nicotine, unlike other units which either deliver it too intensively or take too long. Due to this well set and regulated flow of nicotine, the NicoDerm is widely recommended by doctors.

It is quite cost-effective. One pack goes for $28, and you can use it for 14 days. Though, it depends on smoker’s addiction. Heavy-users may need to apply two patches at one time. It can cause skin rash, so is not given to people with skin allergies. It’s important to put it in a different spot on the skin each time.

It is recommended to use the stop smoking patches for 8-10 weeks. The duration of the treatment period depends on the number of cigarettes a smoker is used to. In 3-4 weeks of use, the cravings are gone, and people feel much better in general. The side effects of smoking habit get less intense either. 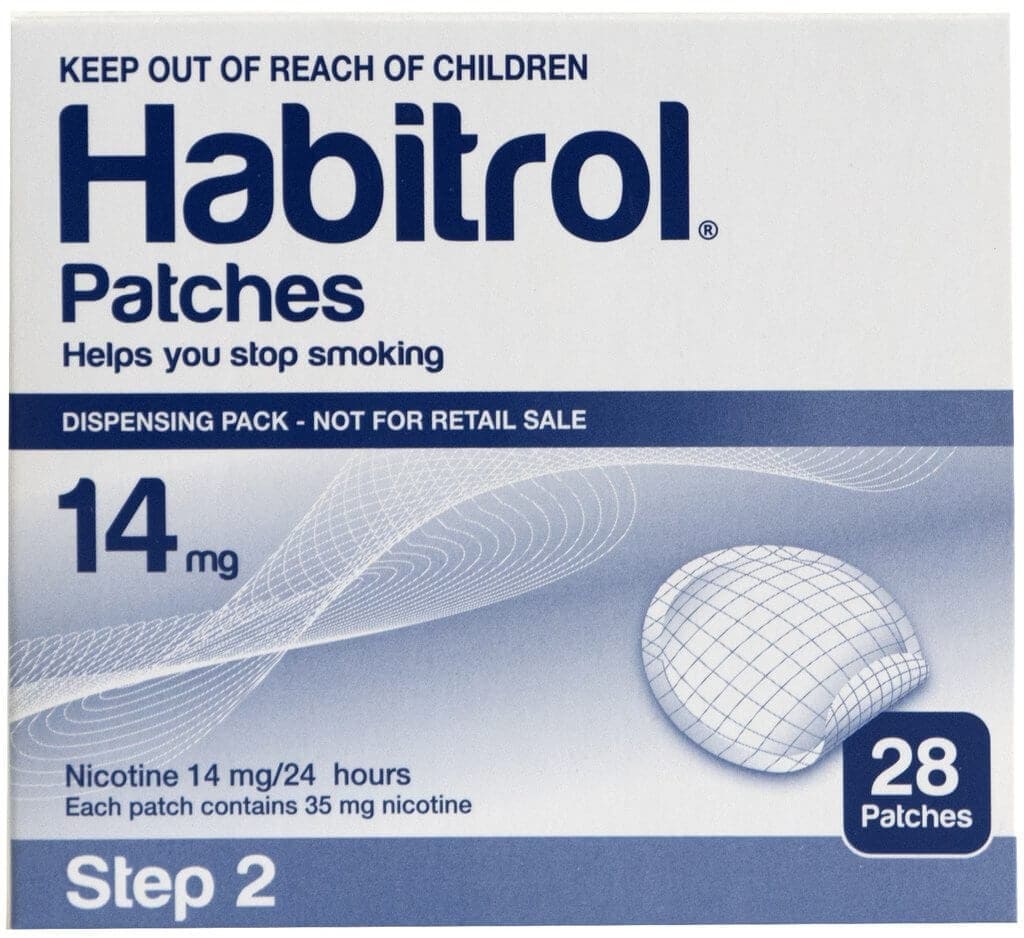 Another product worth mentioning is Habitrol. It comes in packs of 14 pieces at the cost of $30 per box. Each piece lasts about 15-17 hours. Habitrol offers an exceptionally smooth delivery if nicotine, that is slowly absorbed into the bloodstream. They are reported to be very useful in fulfilling smoker’s cravings.

Habitrol has developed an excellent system of potency levels allowing users choose the amount of nicotine they intake and gradually lower it on their way to completing abandonment. They recommend expanding the period of nicotine quitting into an eight-week period. In this time your body won’t consume tobacco in the usual manner, but you won’t also suffer the withdrawal symptoms like irritability, headaches, a growth of appetite or other disorders usually present in such cases.

The only drawback of Habitrol quit smoking patches is that they sometimes don’t stick that firmly and may come off. Therefore it is essential that the skin is perfectly clean and dry before the patches get onto it. Still, the company is improving their product sustainably, so all the small odds like this one may be removed shortly. 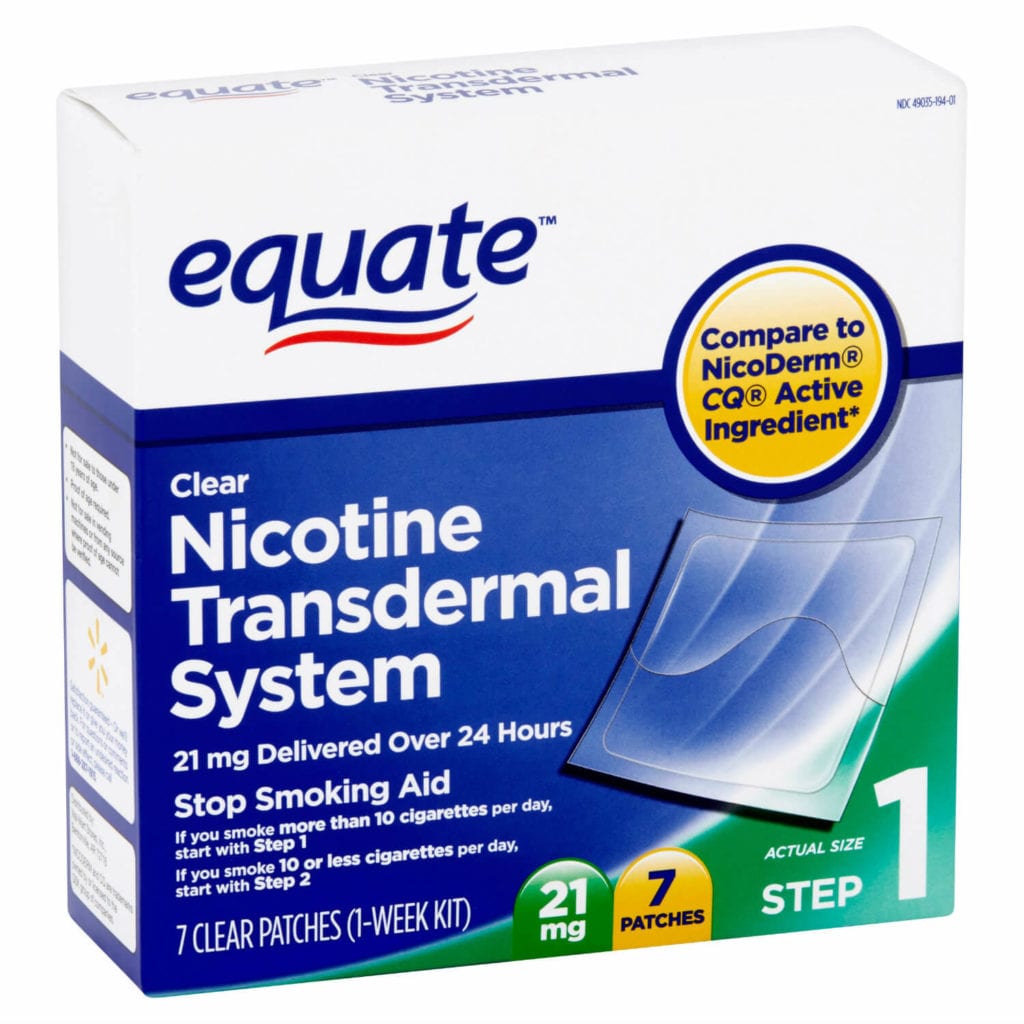 The Equate transdermal nicotine patches are the cheapest and come at the price of $26 per pack of 14 pieces. They have also developed variants with different levels of nicotine. Level or step one is meant for people who are used to take 10 or fewer cigarettes a day. Step two is developed for heavy users. They are famous for the highest quality, but they do an excellent job in fighting nicotine dependence. And they have a more attractive nicotine patch price.

Like Habitrol, the Equate patches can come off after a few hours. It is especially noticed in hot weather. As for the side effects, some users had headaches. Still, in comparison with lung problems and cancer risks you face with traditional smoking, it’s not a high price to pay. 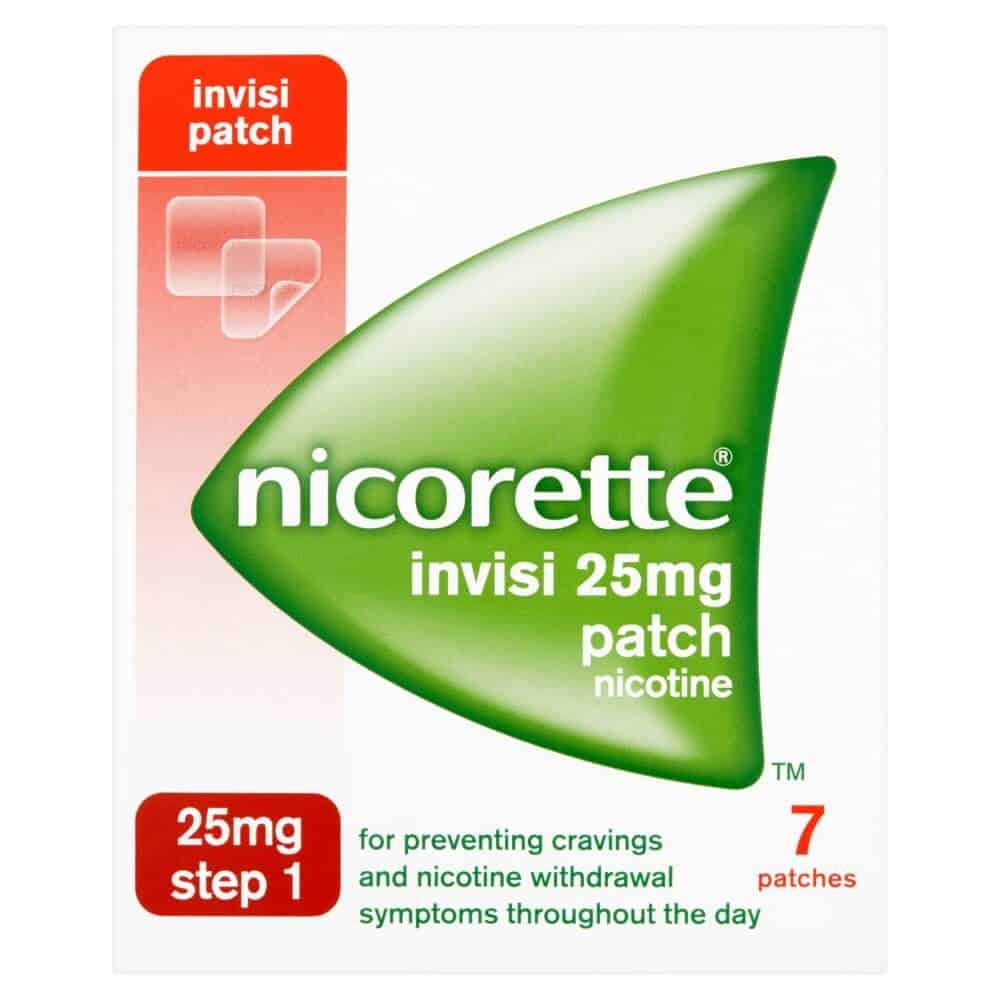 The Nicorette patches are one of the most popular on the market. The 16-day pieces turned to be very useful for smoking cessation and gathered a lot of positive reviews online.

The Rules to Use Nicotine Patches

For the highest level of efficiency and security when using nicotine patches, the following points should be maintained:
– Consumers under 18 should always consult the doctor to choose the best nicotine patch.
– All the kinds of nicotine cessation treatment are designed to help a smoker to quit and not do the job instead of him. Therefore, once you start using the patches, you should take care of the behavioral issues that can bring them back to nicotine.
– You should have a determination to use the patches regularly, without postponing or breaking.
– Unlike e-cigs, the patches give full visibility of how much of nicotine is consumed at every session of use. Though, there are some e-liquids with nicotine indication, vaping still is not as well controlled as using patches.
– It’s essential that wearing patches doesn’t give you any discomfort, therefore finding the best place to put a nicotine patch on your body is very important. Remember, there isn’t the best way fitting everyone, as some prefer. Some prefer sticking pieces to their hands; some chose other parts of their bodies.
– Before taking the patches, everyone should follow instructions first. Minor misuse can make a big difference. Beware the nicotine patch side effects.
– The time of use is 16-24 hours. It is better to take them off for a night in case the user doesn’t suffer strong nicotine cravings.
– After removing a patch, it is advisable to clean the place of contact carefully to minimize the risk of skin issues caused by chemicals and nicotine remnants on your skin.
– Doctors are concerned it’s not a good idea to experiment with nicotine doses by cutting patches of applying more than one at once. In case the given nicotine level is not satisfactory, it’s better to change the patch type.
– Consult a professional before choosing the quit smoking patch that would best suit your individual needs.
– Don’t use patches over 8-10 weeks.
– Keep the patches where no kids or animals would reach them.

The effectiveness of any medication if measured in the number of people who had positive results to the number of people in the control group who had the same results under placebo. In case of nicotine patches, people who received real patches showed twice as the better result than the placebo control group. Also, the people who used unreal treatment showed twice as the better result than those who never tried nicotine cessation. Therefore the effectivity of quitting smoking with patches is measured by a factor of 4, which is a good result.

The Activity of The Imperial Cancer Research Fund

The General Practice Research Group from the Imperial Fund has carried a study of 1686 heavy smokers, with the average smoking experience of 25 years and an average number of cigarettes by day – 24. The research aimed to help people quit smoking within the final four weeks of 12-week treatment period. As usual, the volunteers were divided into two groups of quitters, one on placebo and one on real patches. The placebo group resulted in 11.7% of successful quitters, that’s 99 subjects. The actual treatment group had 19.4% of users with smoking cessation.

The research shows that there are good chances to quit smoking for people who want to stop smoking.

Some researchers report the success rate of 19% to 26%. To conclude with we shall admit that in doing a review we didn’t find facts opposing the use and effectivity of patches like Nicoderm CQ Nicotine Patches. The only thing needed is a real desire for a quitter and determination to continue tries even with changing success. It doesn’t offer an overnight effect but, with some of the willpower and effort, it can improve the quality of life.